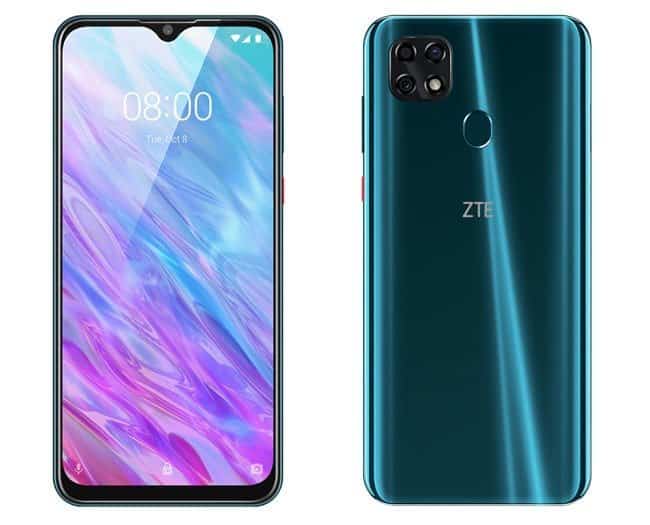 In a previous article, we have claimed that ZTE is going to introduce its Blade series smartphone soon, and last week ZTE Blade 20 5G had appeared on Chinese TENAA listing. Now, this upcoming smartphone has also appeared in China Telecom’s Product Library- revealing the key specification of this upcoming 5G device.

The ZTE Blade 20 5G comes with a model number of ZET 8021N. As per the TENAA listing, this phone will make its entry into the market on November 11 this year (Singles’ Day sale in China). Now let’s get into the specifications of this upcoming phone.

The upcoming ZTE Blade 20 sports a 6.52-inches teardrop notch display. According to the TENAA listing, this phone could have an LCD panel with HD+ screen resolution. This phone will be available in two colour options- Light Blue Mint and Jazz Gray.

The ZTE Blade 20 will be powered by MediaTek’s Dimensity 720 chipset and will run on Android 10 OS. The SoC of this phone will be equipped with 6GB RAM and 128GB of internal storage configuration. There is no confirmation about the battery capacity and the changing speed of this upcoming smartphone.

Now coming to the camera section, the ZTE Blade features a triple rear camera setup, including- a 16-megapixel primary shooter alongside an 8-megapixel ultrawide shooter, and there is an additional 2 megapixels sensor which is presumably a depth sensor. On the front side, there is a teardrop notch on the display to hold an 8 MP front camera for selfies and video call purpose. This phone has a rear-mounted physical fingerprint scanner just below the rear camera module.

The upcoming ZTE Blade 20 5G is listed with a pricing of 1,699 Yuan (Roughly Rs. 18,864) and is expected to release on 11th November. In terms of availability, this phone will be available in the European market.

Finally, Motorola E7 launched at a pocket-friendly price. According to the company, it has a similar design and some of its specifications with its...
Read more
Redmi

A piece of good news is coming from Xiaomi, as the company is going to release a new 5G device Redmi Note 9 Pro...
Read more
Gionee

ZTE hints at the launch of a new Smartphone tomorrow

ZTE has teased an announcement of a new device this morning. In this teaser, ZTE has shared that there will be a new announcement...
Read more
smartphone

ZTE has recently launched its Yahoo themed affordable smartphone for just $49, named the ZTE Blade A3Y. Yahoo has teamed up with ZTE and...
Read more
smartphone

As per the reports, ZTE will bring the First ZTE Blade phone of 2020 which will support the 5G connectivity. Apart from this, ZTE...
Read more

The second half of the group stage fixtures kicked off on Tuesday and Wednesday as the best teams in Europe faced off in the...
Read more
Mobile Accessories

The upcoming Oppo A53 5G with a model number PECM30/ PECT30 has been spotted on the TENAA certification website. Recently it has been confirmed...
Read more

Along with the normal smartphones, Samsung has produced some premium foldable smartphones as well. But as of now, we have not heard anything from...
Read more

Finally, Motorola E7 launched at a pocket-friendly price. According to the company, it has a similar design and some of its specifications with its...
Read more

A piece of good news is coming from Xiaomi, as the company is going to release a new 5G device Redmi Note 9 Pro...
Read more