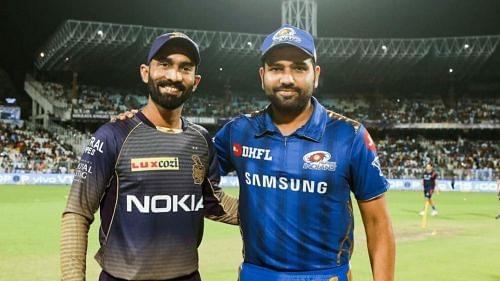 Match 32 of the IPL will feature another interesting match as defending champions Mumbai Indians will take on Kolkata Knight Riders.

The last time when both the sides met, the Mumbai Indians defeated KKR by a massive margin of 49 runs.

MI has won five of their seven matches and is coming off four consecutive wins. They have looked flawless in all departments of the game. Many people thought their last match against the Capitals would be their toughest test, however, they passed it with flying colours as well. They would like all their players to continue playing their roles and carry the momentum till playoffs and beyond.

KKR was playing really well until their last match where they made a probable technical error by excluding Sunil Narine for Tom Banton. Narine was instrumental in their victories in their matches against CSK and KXIP where he handled the death overs. That gamble didn’t work as KKR was taken apart in their last overs by De Villiers and Kohli.

As per their batting is concerned, they might probably commit another error by opening with Banton and Gill. Rahul Tripathi played really good as an opener which won them the game against CSK. Andre Russell will have to contribute with his bat. They would like to work their way around these tactical mistakes.

ROHIT SHARMA (10.5) (C) –  Hitman has been timing the ball beautifully. He has been in the top-five of the highest run-scorers and also set a platform for Hardik Pandya and Kieron Pollard to explode. He’ll be our captain.

SHUBMAN GILL (9) (VC) – Gill is in great form and has been really consistent for KKR. He’ll be our vice-captain.

SURYAKUMAR YADAV (9) – Yadav has been in great form. He’s coming off a beautiful 79 runs in only 47 balls against RR and a match-winning 53 against DC.

QUINTON DE KOCK (9) – De Kock has regained form with his innings against SRH, RR, and DC.

HARDIK PANDYA (9) – Hardik Pandya has looked in great form. He does not take time to settle and can explode at any moment.

KIERON POLLARD (9.5) – Pollard has been in great form this IPL. He has been scoring important runs with excellent strike-rates. He also gives Sharma 2-3 decent overs.

ANDRE RUSSELL (10) – Russell will have to perform for KKR to do well. He has gained some form in bowling as he provides 3-4 solid overs.

TOM BANTON/ VARUN CHAKRAVARTHY (8) – Tom Banton has really been a star in Big Bash League and for England in their series against Australia. However, if KKR does not include him, we go ahead with Varun Chakravarthy who has been good this season.

TRENT BOULT (8.5) – Boult has been doing a good job by keeping things tight and picking wickets as well.

JASPRIT BUMRAH (9) – Bumrah has gained form to be the second-highest wicket-taker this IPL.

PRASIDH KRISHNA (8) – Krishna has been great in the two matches he played where he picked up five wickets. He can bowl some lethal yorkers as well.

KKR has a lot of combination issues with their playing 11. MI, on the other hand, is the most balanced side of the tournament with each and every player playing his role. Batting is probably KKR’s strongest aspect, however, MI has the likes of Bumrah, Boult, Pattinson, Chahar, and Krunal Pandya to nullify that. Mumbai Indians will therefore defeat the Kolkata Knight Riders.