OFFICIAL: Arsenal has triggered Thomas Partey’s release clause and signed him on a five-year deal 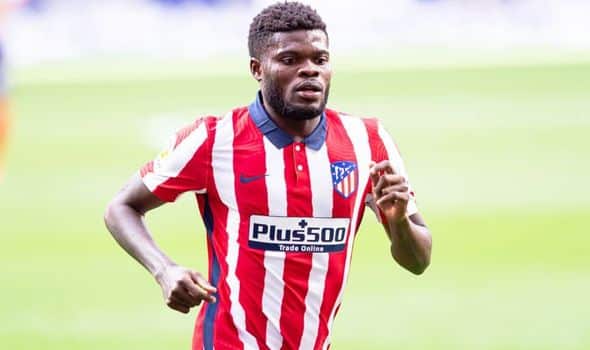 Atletico Madrid manager Diego Simeone rates Partey highly and was reluctant to let him leave for any cost this summer. The only way for Arsenal to sign Partey was to pay his €50m release clause.

Mikel Arteta is rebuilding his Arsenal team. He targeted Lyon’s Aouar and Atletico’s Partey. After the French midfielder publicly said he wants to stay at Lyon, Arteta has turned his full focus on the 27-year-old Ghana international.

Now, according to Fabrizio Romano, LaLiga has confirmed that Arsenal has triggered the release clause of Thomas Partey.

Arsenal will be paying €50m as Thomas Partey’s release clause. The 27-year-old midfielder will sign a five-year deal at the Emirates.

He has already flown to London for his medicals and to sign the contract which runs till 2025.

Arsenal has already loaned out Guendouzi to Hertha Berlin, to make room for a new midfielder. Lucas Torreira is also set to join Atletico Madrid on a loan deal as he is not in Arteta’s plans.

The signing of Thomas Partey would definitely add more solidity to the Arsenal midfield along with Ceballos and Xhaka. This would give more opportunity to Aubameyang, Lacazatte and Pepe to cause more trouble to the opposition.