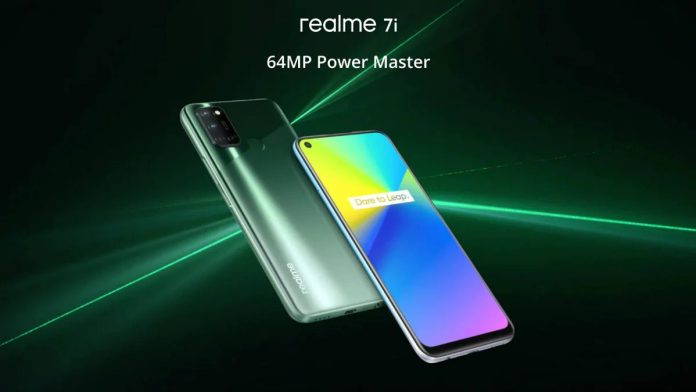 Realme has launched its Realme 7 and 7 Pro models at the beginning of this month. Apart from this, the company has also introduced the 7i model in the Indonesian market. A couple of days ago, Realme has confirmed about the Realme 7i smartphone that it will be unveiled very soon. Right now, the company’s India and Europe CEO Madhav Sheth teases the arrival of a Realme 7i.

Madhav heth has tweeted that “something new and exciting” is coming up and more of the information of this upcoming phone will be revealed soon on the next episode of the ongoing Realme community Q&A series Ask Madhav. Right now, we’ve got a leaked image, in which we can see a glimpse of the Realme 7i in its Aurora Green variant, as suggested by its quad rear camera setup.

As of now, we don’t have any further information regarding the Realme 7i as the tweet does not include it. But we are almost confirmed that the leaked image will definitely be the Realme 7i, as it hints an imminent launch of the Realme 7i in India.

The Realme 7i comes up with a 6.50-inch touchscreen LCD display (with a resolution of 720×1600 pixels) with a refresh rate of 90Hz. This phone runs on Android 10 OS and gets powered by an octa-core Qualcomm Snapdragon 662 SoC processor. This phone comes with the variant 8GB RAM and 128GB internal storage. The storage can be further expanded via an external microSD card.

Coming to the battery section, this phone is equipped with a decent 5,000mAH battery, which supports proprietary fast charging by an 18W fast charger. Regarding the color variants, this phone comes in Polar Blue and Aurora Green colors.