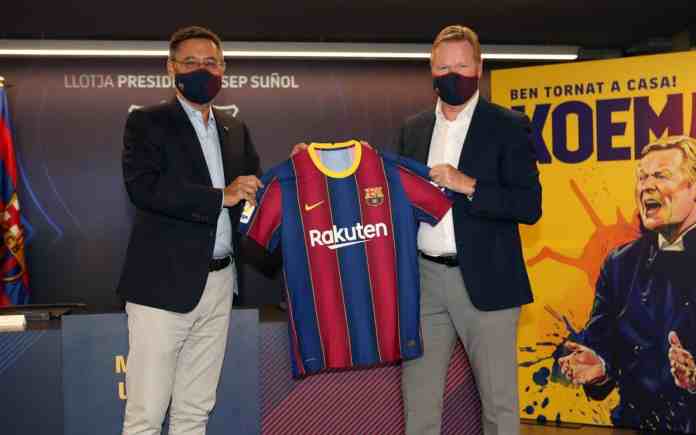 New Barcelona coach, former player Ronald Koeman was rumoured not to have Suarez in his plans and the club wanted the Uruguayan out of Camp Nou. Suarez, the third-highest goal scorer for Barcelona in their history was reluctant to leave and wanted to fight for his place at Barcelona. But the board has finally won as Suarez has been forced to join Atletico Madrid.

Ronald Koeman has now spoken about the departure of Suarez to Atletico Madrid. He insisted that he isn’t the ‘Bad Guy’ in this transfer drama.

Koeman said ahead of Barcelona’s match against Villarreal: “It seemed that I had been the bad guy in this movie, but it is not like that.”

“Since the call [regarding Suarez’s future], I have shown respect for him and I have always told him that it can be difficult to play but, if he stayed, he would be one of the squad.”

“Before I signed the contract, the club was thinking about things, and I have tried to support those things. They are not just decisions of the coach.”

“Luis and I respect each other and we have spoken clearly about his future. He had the opportunity to go to Atletico and I wish all the luck in the world.”

Messi posted on Instagram a farewell message for Suarez. But the main surprising part of the message was this part, “not to get kicked out like they did. But the truth is that at this point nothing surprises me.”

Koeman added: “It is normal for him to be upset that a friend has left, but I have no doubt about Messi. I have seen him train.”

“If you ask the coaches who have been at Barca, they will surely tell you that they have never had a quiet day.”

“I knew that when I had to face changes I would have people in favour and others against. I knew it.”

“No problem, it is part of being in the best club in the world, although I hope there is a little more peace of mind.”

Koeman has started his Barcelona journey in a positive note after beating Villarreal by 4-0. The new-look Barcelona looked fluid and maybe he could guide them once again to the pinnacle of club football.

El Clasico – Barcelona vs Real Madrid: Lineup and how to watch the LaLiga match live in India?

The first meeting of the two Spanish giants will set the trail for the rest of this season. Both the teams will...
Read more
Football

Covid-19 pandemic has become a reason for the economical crisis all over the world. Many football clubs are facing a problem in...
Read more
Football

Lionel Messi has already become a legend of the game and one of the greatest players to ever play the game.
Read more