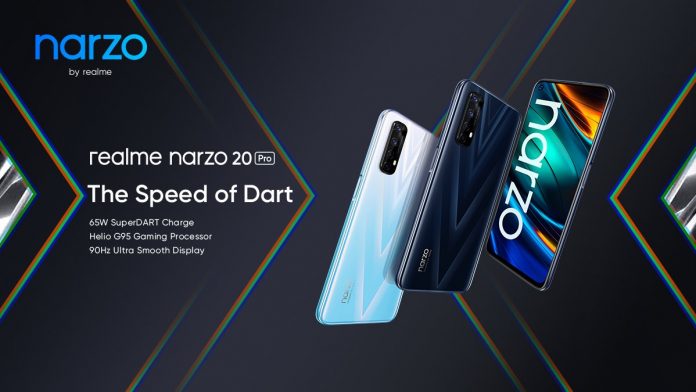 Finally, Realme has launched its Narzo 20 series a couple of hours ago. Let’s talk about the frontline smartphone of that series, the Realme Narzo 20 Pro. Looking at its specifications, it is quite similar to the Realme 7 except the camera and the 65W super dart charger. Now let’s get into the specification part of this phone.

The Realme Narzo 20 Pro runs on Realme UI v1.0 which is based on the Android 10 OS and is powered by an octa-core MediaTek Helio G95 gaming processor. Regarding the display, this phone offers a 6.5-inch full HD+ (2400 x 1080 pixels) IPS LCD display with a refresh rate of 90Hz and a 20:9 display ratio. The Narzo 20 Pro comes in two different color variants: Black Ninja and White Knight.

Coming to the battery, this phone comes with a decent 4,500mAH battery which supports insane 65W fast charging. The company claims that the phone will charge from 0 to 100% within 38 minutes. The Narzo 20 Pro has all the connectivity features except FM radio. Also, this phone does not have a noise-canceling microphone on the top.