Dembélé and Araujo back to train with the Barcelona group 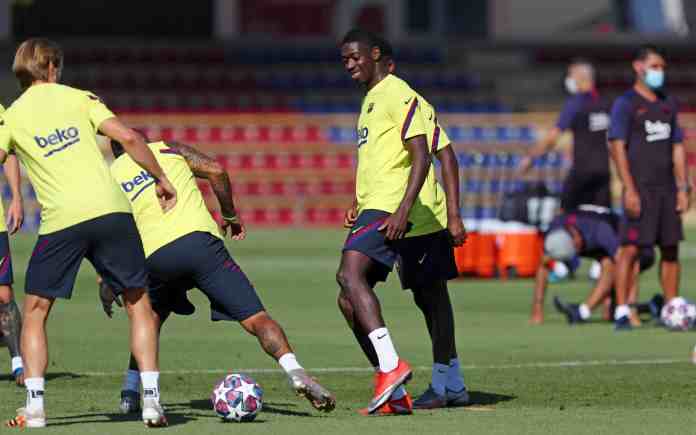 Finally, some more good news for Barca fans out there is both the injury-stricken Ousmane Dembélé and Ronald Araujo are back to train with the group and are looking good during training. Dembélé had been out for several months now and slowly and steadily has returned to the training to take part in the Champions League campaign before Saturday’s match against Napoli at the Camp Nou.

“All available players from the FC Barcelona first-team training on Thursday morning at the Ciutat Esportiva, amidst intense heat. Ronald Araujo and Ousmane Dembélé completed the session with the group, coming back from respective injuries. The next training session for the team will be on Friday at 9:30 am CEST, following which Sergio Busquets and coach Quique Setién will give a press conference to preview the European tie.”

Most probably, Dembele will not be a part of Setién’s team on Napoli’s game but eventually might end up bringing back the firepower in the Barca attack in Lisbon. It will be great to see the young Ronald Araujo as a substitution if anything goes wrong with either of the center-backs during the match. The Champions League Last 16 tie will take place on Saturday at 9 pm CEST at Camp Nou.

HP has announced a wide range of laptops and one of them being its budget HP Pavilion 13 powered by the latest...
Read more
Laptop

Although HP has launched quite a few gaming laptops with the latest Ryzen 4000 series mobile processors, in their consumer line of...
Read more
Technology

The Luis Suarez transfer saga has taken yet another twist. A latest news report has suggested that after the option of terminating...
Read more

In a rather shocking development over the last few days, Morata looks set to join Juventus on loan. That is according to...
Read more

It is quite the time to be a Barcelona fan at the moment. A series of ongoing dealings are happening, both arrivals...
Read more
Load more

IPL 2020: Mitchell Marsh likely to be ruled out of the entire IPL due to injury

Day 3 of the IPL 2020 featured an interesting match as the ever so balanced Sunrisers Hyderabad took on the unpredictable Royal...
Read more