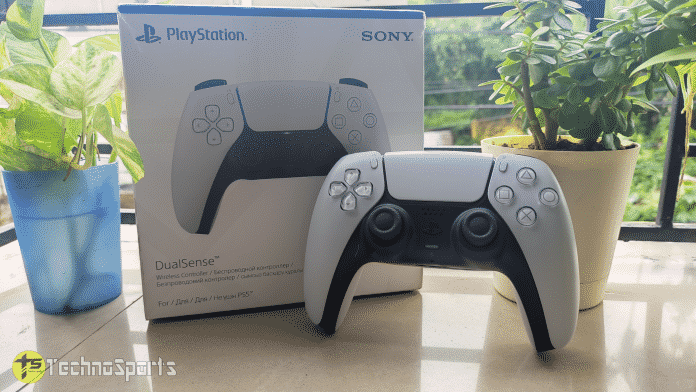 Okay, we are late reviewing this true gem of Sony but, better late than never! Previously, we didn’t want to review the controller because of the absurd prices and the lack of availability in India; however, you can now get it for just ₹ 5,990 with Free One-Day delivery on Amazon.

Even though getting one PlayStation 5 at its asked price is as hard as winning a lottery in India now, sales occur only on select dates in a month. So, if you are looking to get one wireless controller for yourself, which is much easier to get, I will simply lay the points why you should prefer it over others:

The Best Controller Sony has ever made!

Yes, making controllers for its PlayStations have been a Japanese giant job for decades now, and to match all the hype surrounding the PlayStation 5 is always pressurizing. You have the Redmond conglomerate spending millions to make its Xbox’s better.

From the touchpads to even the nice-looking light bars, the overall layout and iconic design have not changed much in 23 years since that first DualShock was launched. Sony has kept its essence with the design, but my God, the comfort you get when holding this is clear because of the long handles of the DualSense.

This is why your entire hands can rest on them comfortably, and playing them for hours with this is a better experience than Xbox controllers or previous PlayStation controllers. So, in terms of ergonomics as well as gripping, Sony has a slight edge I feel over the competition.

If you do end up buying the DualSense Wireless Controller, you won’t regret it at all because the controls here are simply incredible! Add the comfort that this device gives you; Sony has already had an edge for the key ingredients of a wireless controller.

The buttons are more tactile and sensitive, so you won’t have to press hard at all, which again makes using this one for hours easier. On the other hand, I have to say that the enhanced sticks on this controller is really smooth, gives a pleasurable gaming experience overall.

Another quick addition that Sony made, which is really great, has to be the dedicated mute button that easily lets you switch voice capture on & off. Also, the addition of the dedicated share button lets you record & broadcast your epic gaming moments.

These improvements in terms of looks and design become minute when you actually start playing games with this control. Immediately you will notice the improved haptics while the L2 and R2 triggers do nearly feel identical to the DualShock 4’s, however. Still, when you play a game that supports adaptive triggers like Astro’s Playroom, the experience is up to some other level!

This means your controller will turn into more of a real-world object, so the force required to pull the trigger could change eventually depending on what’s happening on the screen. Now to enhance this effect, Sony has even used an internal speaker that helps to mimic the sound of the spring or shutter going off while playing Astro’s Playroom.

Sony has improved the haptics as well using the next generation of vibration technology. In games like Astro’s Playroom, when Captain Astro’s little feet are tapping across a glass surface, the gaming experience is completely next-gen. When you play such a game, the feeling you get is up to some other level honestly and cannot be described unless you experience it.

However, the problem now is not many games do support all the Sony features in the PS5 as even a year is not completed, and we need to give more time for developers to implement the tech. It is expected that all the Sony published gaming titles will indeed make the most out of these features in the coming days.

Another new feature I genuinely like the most is that every one of these DualSense controllers come with a built-in mic. This easily lets you communicate with your friends as well as foes when you play online without having to look for a headset.

It doesn’t have the best-in-class mic but is just ok to have while using the in-built speaker; you can hear your buddy’s voice chat or just plug in a headset for a better gaming experience, all from the controller itself.

This is one of the best controllers in the market, and the experience you get from its totally unimaginable and cannot be explained until and unless you experience it. Sony has gone a long way to making the DualSense controller better than last-gen, and the total design, the gaming experience is truly next-gen.

The battery life of the controller is great, around 7-8 hours depending upon which game you play; it can even work for a week if you play less than 2 hours a day. Casual gamers won’t have to worry about charging a lot, and even if you are a heavy gamer, you still have to play a lot to drain your battery.

Overall, Sony has outdone itself in making the PlayStation DualSense controller better than the industry standards. The haptics, buttons, adaptive triggers and everything make it really special while the best experience you get is on a PlayStation console; you can even use it on your PC, which we will bring soon, so stay tuned!

The New Gran Turismo updates include GT Vision and other Cars, Events, and Image Exports

Sony PS5 India restock happening on May 13th at 12 PM