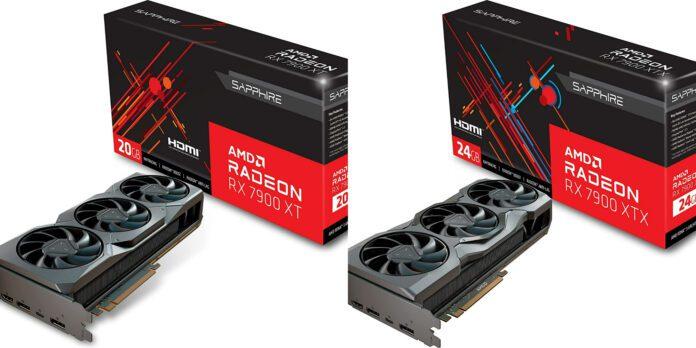 AMD has already announced both its new flagship GPUs for its new RDNA3 architecture and its new RX 7900 series GPUs. Priced up to $999, both the new Radeon RX 7900 and Radeon RX 7900XTX are affordable options for gamers who aren’t looking towards costly NVIDIA’s Geforce RTX-40 series.

Sapphire, who is one of the biggest AMD-only OEMs has already got its upcoming RX 7900 series cards listed on Amazon. It’s as per the company’s claims to release two of these highly-anticipated models based on AMD reference design and as we see in the product image there is almost no difference between the reference design and these.

As we got a report earlier that these RX 7000 series cards will have a better supply than NVIDIA’s RTX 40-series and this is indeed true because even before being available these cards got listed on Amazon. The company’s flagship, the RX 7900 XTX, is advertised as being up to 1.7 times quicker than the RX 6950 XT card it currently offers for 4K gaming.

On the other hand, the AMD Radeon RX 7900 XT is a less potent choice at $899; it has 20GB of GDDR6 memory operating at a little slower 320 bits and 84 compute units running at 2GHz, along with a board power of 300W. RDNA 3 is expected to deliver up to a 54 percent increase in performance-per-watt over RDNA 2, which employed a more conventional GPU design

Currently, these two models have been listed on Amazon:

As we already know, the market availability starts on December 13th, just 10 days from today and if you want to be the first one buying these new AMD GPUs, head over to Amazon and make sure to wishlist them: RX 7900 XTX and RX 7900 XT.