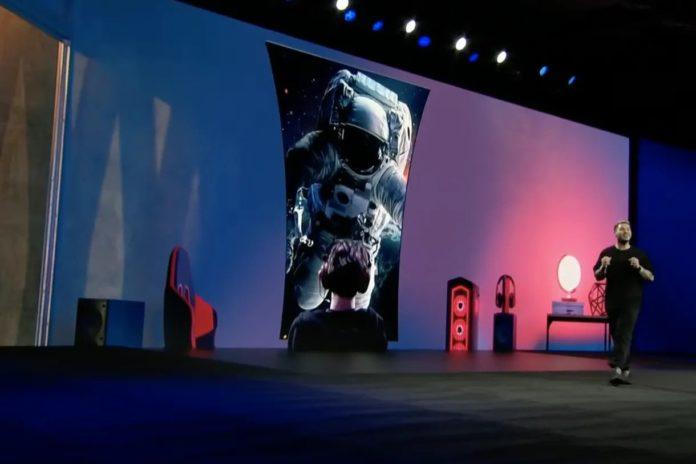 But the company isn’t content with simply filling your horizontal field of view with 49 inches of real estate; today at CES, it’s unveiling a 55-inch curved screen with a special stand that allows you to turn the massive display vertically, allowing it to curve right over your head.

It’s called the Samsung Odyssey Ark, and the business is promoting it as a real product that will be released in the second half of the year in the United States. The panel appears to include quantum dot colour and Mini LED illumination, but we don’t have a price or a specific delivery date. It’s unclear whether the Odyssey Ark is intended for gaming, productivity, fashion, or all of the above.

Details are so light that I’m going to share the entirety of what Samsung sent us with you:

Odyssey Ark is a next-generation flexible monitor perfect for people doing everything from editing to gaming at home. The Ark is the new industry-leading gaming display with a curved 55-inch display and 16:9 aspect ratio.

Multiview options allow users to adjust Odyssey Ark exactly how they want it with an adaptable screen size to fit the game or the program without compromising its 4K display and bright, colourful images. The monitor also features a wireless, dial controller to manage lighting and the interface.

Even though the curvature seems similar from here, it wouldn’t be nearly the same with a 16:9 aspect ratio as those older super-ultrawide 32:9 panels. (Does this imply that it’s merely a curved TV? Not quite, although these days, TVs and monitors are getting a lot closer.) The standard aspect ratio could assist with the stretching effect I noticed in games, as well as reduce the amount of empty area surrounding movies and shows.

I first struggled to think of a reason why I’d want to turn one of these incredibly curved monitors vertically after reviewing a pair of them. However, watching it in action, as captured by Tim Schofield, reveals much more of the Odyssey Ark’s multitasking potential.