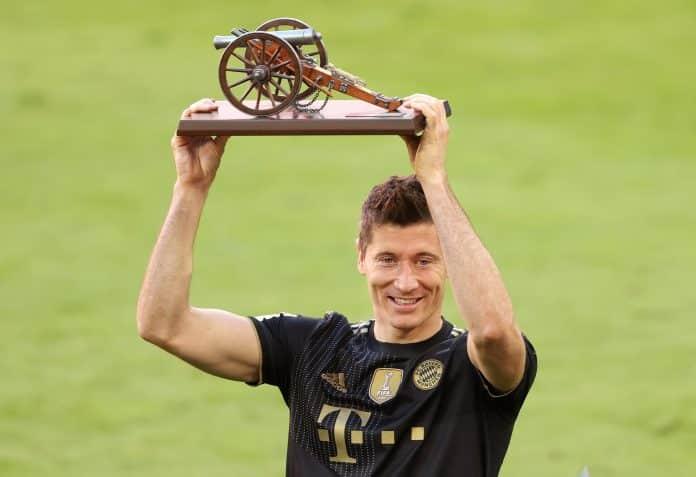 Robert Lewandowski has broken Gerd Muller’s record of scoring 40 goals in a single Bundesliga season. The Polish striker now has 41 goals in a single season, and the most impressive part? He did it in 29 games, which is 5 less than Muller himself.

Bayern faced Augsburg on the final day of the 20/21 Bundesliga, and with Joshua Kimmich, Serge Gnabry and Kingsley Coman getting on the scoresheet in the first half, it looked like Lewandowski would fall short of the mark.

However, opportunity beckoned in the form of an open goal at the 90-minute mark when Leroy Sane’s long range effort was saved. The 32-year-old poached the ball, and tapped in to score the record breaking goal in the nick of time to establish himself as an undisputed Bundesliga legend.

Bayern Munich later lifted the Bundesliga title shield for the ninth season running, with it being the last season for David Alaba, Jerome Boateng and Javi Martinez. Lewandowski lifts the top-scorer trophy for yet another season in the Bundesliga, and this time, he has gone above and beyond his own standards.

After missing out on the Ballon d’Or last season, the Golden Ball almost surely belongs to the Bayern Munich forward this time around, along with the European Golden Boot.