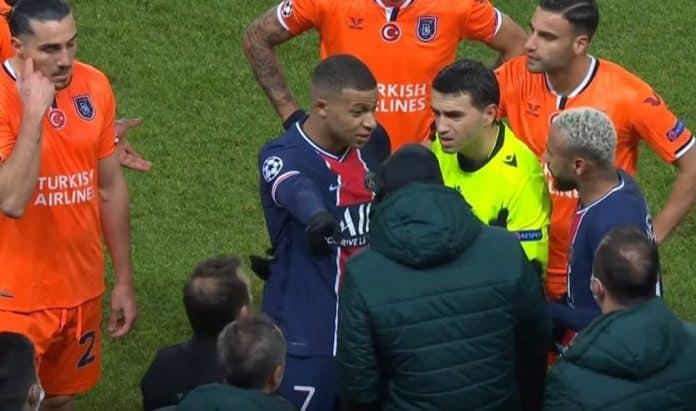 In what was a rather poor advertisement for the improvement of racist abuse in football, the Champion’s League game between PSG and Istanbul Basaksehir was abandoned. The main reason for this is the chaos that broke out early in the game followed by an alleged racist comment by the assistant referee along the touchline.

Sebastian Coltescu is the referee charged with uttering a racist slur during the heated row near the benches. Istanbul’s assistant coach, Pierre Webo was shown a straight red for causing the chaos, but Webo himself confirmed that there was the issue of racist abuse that had taken place during the heated row.

Apparently, Coltescu’s words, when translated in English equate to: “The black one over there. This is not possible. Go and identify him. That guy, the black one.”

Basaksehir’s striker Demba Ba, among the substitutes for the away side, could be clearly heard on television remonstrating with the official, saying in English: “When you mention a white guy, you never say ‘this white guy’, you just say ‘this guy’, so why when you mention a black guy do you say ‘this black guy?'”

“The fourth official used the word ‘negro’ in front of everybody. If the fourth official is removed from the pitch, then we will restart,” Göksel Gümüsdag, the President of Istanbul Basaksehir told Turkish television channel TRT Spor.

The match was understood to be restarted after both the players decided to abandon it, but the demands from the players were that the match would not be played if Coltescu was on the pitch. There were no reserve officials for the match, with two refs required for overlooking the VAR.

Hence, the remainder of the match will be played out today, with the game resuming from around the 14th minute. Kick-off is understood to be at 18:55 UK, or 23:25 in India.

UEFA have announced that a thorough investigation will be conducted into the matter and that the referee will not be assumed guilty on the basis of allegations alone. Should Coltescu be found guilty of racial abuse, he could be facing a ten-match ban from officiating.