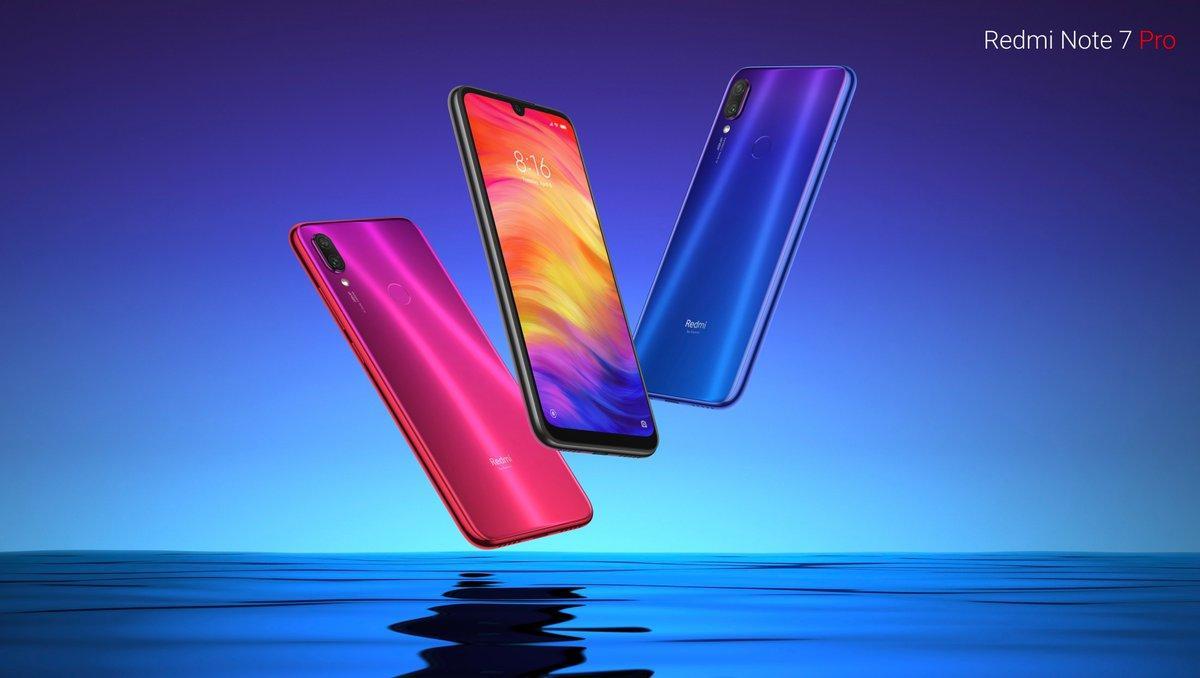 Mi and Redmi became separate few months back and so Redm India’s first product is the new Redmi Note 7 series. Everyone expected the Note 7 launch in India only but to our surprise both the devices got launched in India at the same go.

So, today Xiaomi India has surprised all of us by launching the Redmi Note 7 Pro first in India, i.e. the global launch of this device has been done in India rather than its origin country China.

The Redmi Note 7 Pro with its mind-blowing features and its aggressive pricing will again rule the Indian smartphone market once again. Why? Let’s check out:

The Redmi Note 7 Pro has a stunning aurora design that totally changes the look and feel of the new Redmi Note 7 series. The glass back feels premium and is also protected by the Corning Gorilla Glass 5 protection.

There are three new colours for the Redmi Note 7 Pro including Purple Blue, Black, & Purple Red. With a decorative design, glass back finish and gorgeous looking colours, Xiaomi has changed the party totally.

This is the first dew-drop or dot notch implemented Redmi Note series, so the Redmi Note 7 Pro bears a 6.3 inches FHD+ Display with 1080 x 2340 pixels resolution.

It has a great 81.4% screen-to-body ratio with Corning Gorilla Glass 5 protection. Considering its price, this device has a great display.

The Redmi Note 7 Pro is powered by a humongous Qualcomm Snapdragon 675 processor based on 11nm architecture.

This processor easily beats the superior Snapdragon 710 or Kirin 710, Exynos 7904 and the Redmi Note 7 Pro has some impressive benchmarks, ripping off its opponents including Honor 10 Lite, Samsung M30, Oppo K1 and others.

Also the Qualcomm® Adreno™ 612 GPU gives a superior graphical performance during gaming or any graphical work.

Both the Kryo 460 and Qualcomm® Hexagon™ 685 DSP are the only things present in this chip is similarly present in the flagship Snapdragon 855 processor as well, that makes this 675 chip so special.

The Sony IMX 586 sensor is a true 48 MP camera sensor which is found in Honor View 20. This sensor is the primary sensor of the dual rear camera present in this Redmi Note 7 Pro. It is a 1/2 inch PDAF 0.8µm sensor with an f/1.79 aperture.

This helps the camera to capture more light than ever and according to the samples shown by Xiaomi, the sensor truly performs well in any lighting conditions.

Redmi Note 7 Pro’s rear camera performance is brilliant as it is able to capture a lot of details including 48 million dots with this particular sensor.

When camera samples were shown against its mid-range competitors, this smartphone easily beat them all and even beating the so-called flagship OnePlus 6T.

Due to the intelligent enough Snapdragon 675 that has Qualcomm Spectra™ 250L image signal processor within it, you get enhanced photography. The 2x Image Signal Processor (ISP), 14-bit will help you a lot in getting higher resolution photos.

The Redmi Note 7 Pro will surely not disappoint you in front cameras as well, it packs in a 13 MP AI front camera. So, with this you will be able to take beautiful selfies as well.

Though there’s no dual front camera this time Xiaomi says its AI capabilities will help get smooth selfies with bokeh effect.

Like all other Redmi Note series, the Redmi Note 7 Pro has a big 4000 mAh battery. This time there’s also a Type-C port with 18 Watt Quick Charge 4 support.

Xiaomi has this time stressed on the quality of Redmi Note 7 by implementing Gorilla Glass 5 protection for both front and back. Also, they have assured with falls or any damage the smartphone will able to withstand it.

The Redmi Note 7 can even break nuts with itself even without getting any scratches. Xiaomi has made the Note 7 series splash proof, which means, your Note 7 or Note 7 Pro can withstand any kind of water splash or sweat easily as its ports have sealed.

Now the thing that surprised everyone out there is the pricing of this device. When you compare the Redmi Note 7 Pro’s specs including the Snapdragon 675 which when used in devices like Vivo V15 Pro, has been priced at about Rs.30k.

On the other hand, the Sony IMX 586 image sensor used in Honor View 20 makes the device price at Rs.35k+. So, combining both of the powerful specs, we could easily guess the price to be somewhere around Rs.20k.

This aggressive pricing of the device is just phenomenal, and the specs that are being offered is truly incredible. Well, the Redmi Note 7 Pro is a true successor to Xiaomi’s historic Note series.

Redmi Note 7 Pro’s first sale will be conducted on 13th of March at Flipkart, Mi.com and will also be available at Mi stores. Manu Kumar Jain even promised to deliver the Note 7 series to customers via retail partners asap.

Airtel has also partnered with Xiaomi to provide extra data for its customers who will be buying the Note 7 series as well as attracted lot of customers as well.

So, overall this smartphone is a worthy successor to the Redmi Note 6 Pro even much more superior. The Qualcomm Snapdragon 675 is a chip for mid-range series and I am amazed to see Xiaomi using it in Note 7 Pro and that too keeping a price of a budget smartphone.

Well, everything seems promising along with the costly yet effective Sony’s IMX 586 image sensor. Using a “true 48MP sensor” in a budget smartphone require lot of guts, which Xiaomi or rather the separated Redmi brand has proved this time.

The Note 7 series will surely turn out to be the game changer for Xiaomi and retain its number 1 position in the Indian smartphone market which they have been since last six quarters. What do you think? Tell us in the comments down below… 🙂