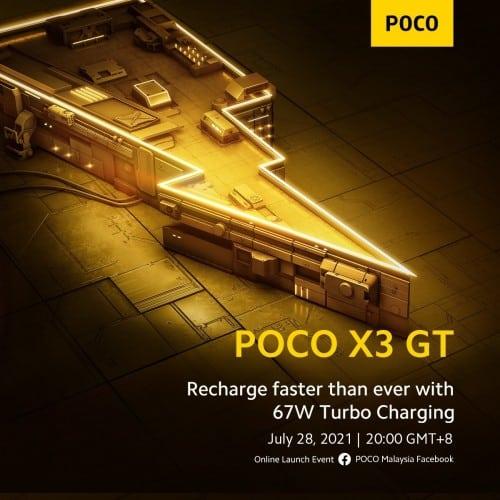 Smartphone brand POCO recently confirmed that their upcoming device, the POCO X3 GT that is scheduled to arrive on July 28 will be powered by the Dimensity 1100 SoC. POCO has now announced that the device will come with support for 67W Turbo Charging.

POCO has kept the majority of the specs of the POCO X3 GT under wraps so far, there are rumors that claim the X3 GT will not actually be an entirely new device but a rebranded version of the Redmi Note 10 Pro.

A look at the leaked images renders these rumors credible, at least from the design perspective. It appears as though POCO will release the X3 GT in 3 color variants, a black version with a bit of gradient finish, an aqua blue colorway and a classic white colorway.

Assuming that the specs of the POCO X3 GT will be similar to the Redmi Note 10 Pro, we can expect to see a 6.6″ Full HD+ 120Hz LCD display, a massive 5,000mAh battery, and a side-mounted fingerprint scanner.

When it comes to the camera specs, we will most likely get the 16MP selfie shooter that is integrated into the punch hole, and the triple camera setup on the rear will have a 64MP primary sensor, an 8MP ultrawide lens, and a 2MP macro lens for depth.