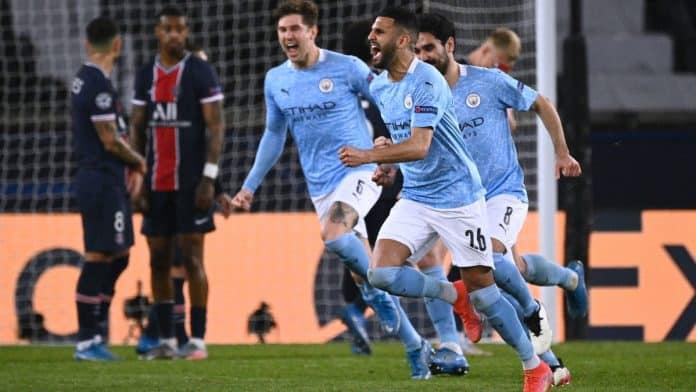 Manchester City travelled to Paris to face the mighty Paris Saint-Germain. PSG lined up an exciting front three of Neymar, Mbappe and Di Maria. The trio could take apart any defence on its own.

PSG started the game brilliantly and took the lead from a headed goal by their captain Marquinhos. They dominated the first half. But thanks to Guardiola’s half-time talk, Manchester City came out as a different team after the break.

City started high up the pitch and pressed well to take the pressure to the opponent’s camp. City captain Kevin De Bruyne was successful in finding the net. He crossed the ball, but nobody came close to it, and it eventually ended up in the net. It was one of the luckiest goals of De Bruyne.

A few minutes later, Mahrez stood up to take a freekick. He wanted to hit it around the wall but couldn’t, and the ball just went through the wall and into the net.

Mahrez told City’s website when asked about the free-kick goal post-game: “I wanted to go around the wall to be honest and I missed it, it went between the two players and fortunately it was in.”

“I was so happy, I knew we could win here and to score to make it 2-1 for the team was amazing.”

It was enough for Manchester City to win the game, and PSG could only blame themselves as a reckless challenge from Gueye saw them reduced to 10 men and Mbappe was also ineffective in the second half. Pochettino is unhappy with his team’s performance in the second half and would be raring to go out on all attack in the second leg.

Pochettino said after the game: “There were two different halves, we did well in the first half but it is difficult to eliminate a team like City. We deserved to be ahead but they were better than us and dominated the second half. The two goals were accidents, but they created more than us. It was one half for each team.”

“The two goals are very disappointing. It is difficult to accept but that can happen, and it has happened in a semi-final. It is very painful.”

“The second leg, in football you need to believe. They have the advantage.”

Manchester City captain De Bruyne told BT Sport when asked what Pep told the players at half time: “Just play a little bit more with the ball. The first half, we were a bit too rushed, trying to go forward too quickly and that’s not the way we are set up as a team.”

“In the second half we tried to find space more patiently. They’re a tough team to play against. The progression we made as a team was good.”

De Bruyne added on his goal: “It set up in a perfect position. It’s so difficult for the goalkeeper because he expects someone to touch it.”

“We kept going and with the second goal Riyad is good for us. He asked me if he could take it and I said: ‘Yes, if you believe in yourself’. He scored. Who am I to say something?”

“There is still a game to go and we have to concentrate on that.”

Pep Guardiola said post-game: “It looks easy but it’s not easy. I played when I was young and it’s not easy. PSG scored four goals in Camp Nou and three goals against Bayern Munich. They have the quality to do it. You play cautious sometimes, but in a good sense.”

“I was not complaining. I said at half-time, I understand why they were like this but try to play our game. Go out there and try to do it. They were fantastic. I admire them going from not playing good to playing well, it means a lot.”

“Normally when you are not good, you lose 3-0 and it’s over. When you play knock-out stages, semi-final first leg, the players are thinking about not losing. You can’t win qualification in first leg – but you can lose it. So, I understand the players. Sometimes you feel not comfortable.”

“But we spoke at half time and adjusted a few little stupid things, not important things. [The turnaround] depended on the players.”

He further added: “They are so incredibly dangerous with [Kylian] Mbappe in behind. But we found the goals and could have scored more. Just half of the job is done. If we play shy and not who we are, anything can happen and PSG can turn it on. But if we play who we are, maybe we have the chance to reach the final.”

“I was happy in the locker room after the players were calm. Not cheering – just calm. Anything can happen in the second leg. Now we go to Crystal Palace to make important step in the Premier League.”