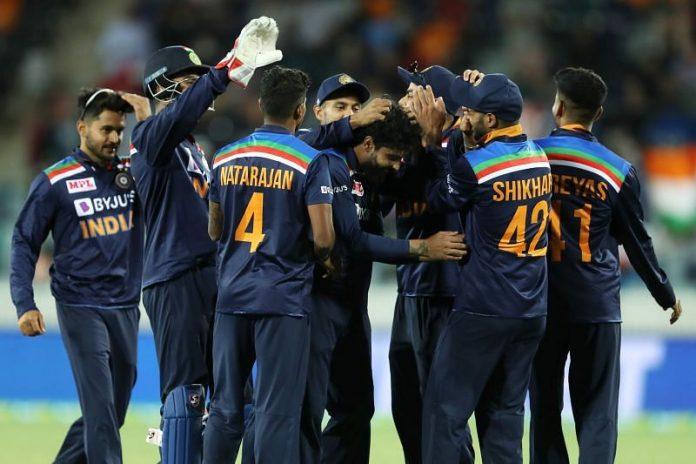 Australia defeated India in the third T20I to avoid a complete whitewash in a three-match T20I series.

India lost by 12 runs in the final game despite Virat Kohli’s third fifty across white-ball formats. The hosts set a target of 187 run chase. Shardul Thakur was denied the opportunity of Glenn Maxwell’s wicket twice due to sloppy catching. First Deepak Chahar dropped him on 38 and then Yuzvendra Chahal gave him a second life on 53 with both easy chances.

A stunning diving catch by Sanju Samson at deep backward point off Tye on the first ball of the penultimate over put paid to Kohli’s hopes for a series sweep.

Virat Kohli’s 85 runs off 61 balls helped in at least touching the run chase given by Australia. The main fault was in the middle overs of India which cost them the match.

The Man of the Series was handed over to Hardik Pandya but in a sweet gesture he handed it over to T. Natarajan, who impressed everyone by playing his first T20I series for India as he finished as the highest wicket-taker with six wickets.

“Natarajan, you were outstanding this series. To perform brilliantly in difficult conditions on your India debut speaks volumes of your talent and hardwork,” Hardik wrote in a tweet after the third T20I, which Australia won by 12 runs. “You deserve Man of the Series from my side bhai!”

“Congratulations to #TeamIndia on the win,” he concluded.

“Thank you brother,” Natarajan wrote in response to Hardik’s tweet.

T. Natarajan’s efforts with the ball by picking up wickets when needed the most and Hardik’s with the bat played a huge role as India beat Australia 2-1 in the T20I three-match series after the hosts beat India in the ODI series.

The two teams will now face off in a four-match Test series.

India vs Australia: The Battle for Border-Gavaskar Trophy Begins!