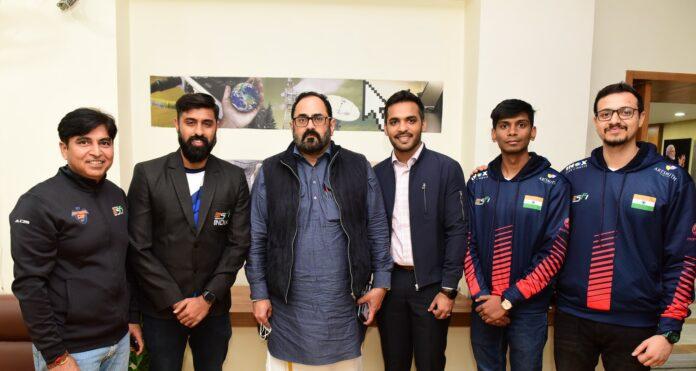 Tirth Mehta, the 2018 Asian Games bronze medalist in Hearthstone and professional FIFA athlete Karman Singh were among the attendees of the meet that shed light on the draft gaming rules and impact of online gaming

Led by Rajeev Chandrashekhar, Minister of State for the Ministry of Electronics and Information Technology, MeitY held a very meaningful & successful consultation with children, parents, teachers, esports athletes, gamers, and safety and trust organizations on the proposed amendments to the IT Rules 2021 in relation to online gaming on Wednesday 11th Jan at Electronics Niketan, MeitY office, New Delhi.

According to MeitY’s Information Technology (IT) Rules, 2021 in relation to online gaming, “online game” means a game that is offered on the Internet and is accessible by a user through a computer resource if he makes a deposit with the expectation of earning winnings.

Raising a crucial query on this point, Dhruv Salvadi (an avid gamer who recently graduated from Manipal Institute of Technology) said, “Multiple esports tournaments organised at college or ground level at times require a registration fee in order for the athletes and teams to compete in it whereupon the winners are presented with prizes which may be in cash and/or kind. This rule can create confusion among the public regarding such Esports tournaments/championships Hence clarity is needed in the definition of ‘online gaming’, he was also of the same opinion that instead of ‘online gaming’ it should be ‘igaming’ so as to establish a clear difference between Esports (which is sport and played electronically) and igaming”

Dhruv further pointed out “Also, for video games that charge users to use their products or contain microtransactions, will all online video game developers need to get KYC for their users?” to which Rajeev ji said, “e-KYC is mandatory for all financial transactions”.

Further, expressing his opinion on the need for differentiating between video gaming and online gaming, Lokesh Suji also a former esports athlete who participated in Call of Duty World Championship – 2018 (New Orleans) said, “The worldwide & dictionary meaning of ‘online game’ is “electronic game played over a computer network, particularly over the Internet”, whereas the draft has added “deposit with the expectation of earning winnings” to this, and is confusing for the public at large. Since these amendments are to regulate fantasy, teen patti, poker, rummy, betting, gambling etc., instead of calling them ‘online gaming’ we should define them as ‘igaming’ the way the rest of the world has defined them.”This enlightening meeting will play a crucial role in the proposed amendments for the IT Rules related to igaming and propel the industry to remarkable heights.

Akshay Munjal, Founder & CEO of Hero Vired says why a certification in Esports/Gaming is required

The Indian government has officially recognised esports in the country, see how the esports industry reacts