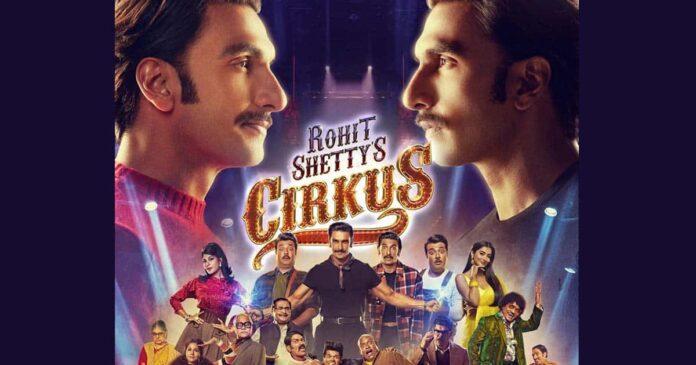 Cirkus Poster is out, and Rohit Shetty‘s new movie is all set to release on Christmas. The much-awaited film of Rohit Shetty starring Ranveer Singh along with a star-loaded star cast will release on the big screen worldwide on 23rd December 2022. It is being produced by Rohit Shetty Picturez and presented by T-Series.

Rohit Shetty and Ranveer Singh introduced the film’s character before the release of the movie’s trailer via a quirky motion poster. Ranveer has dropped a video on the social media platform and has written in a caption, “Before the trailer drops next week, meet our CIRKUS family!!!#CirkusThisChristmas @rohitshettyproductionz @tseriesfilms @tseries.official.”

Cirkus: About the movie

Cirkus movie seems to be inspired by William Shakespeare’s Comedy of Errors, which revolves around two sets of identical twins who were accidentally separated at birth. Ranveer plays a double role for the first time in his career in the movie ‘Cirkus’.

Recently, Ranveer completed his shooting for this movie. He has also made the announcement regarding the wrapping of the movie. On his Instagram page, alongside a picture of him with Shetty and co-actor Varun Sharma from the sets, he wrote, “Shooting khatam, Promotion ki planning shuru! (Shoot over, and planning for promotions begin) Mass-ter filmmaker ke Mass-ter plans! Buahahahaha! #RohitShetty @varunsharma90 #CirkusThisChristmas”.

In order to avoid theatrical clash with Salman Khan starring movie Kisi Ka Bhai Kisi Ki Jaan, Salman Khan’s movie release has been shifted to next year. It is expected to release on Eid 2023 and Meanwhile, Rohit Shetty’s movie is going to release on Christmas.

Read- Who is the Richest Man of all time?