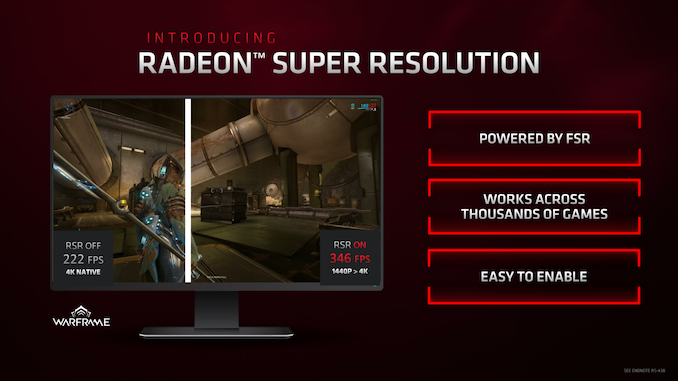 AMD’s official YouTube channel revealed some insights about the planned features of the Radeon Software Adrenalin driver release in 2022. Apart from software solutions like AMD Link and Privacy View, the most intriguing piece is the company’s impending Radeon Super Resolution (RSR), a new upscaling technology that the company promised in its January Livestream.

RSR’s release date has also been pushed back to the first quarter of 2022, according to the new video. As a result, it should be released before the end of March.

When the technology is released, consumers can expect “up to” performance increases, as seen in the video. As always, “up to” refers to a best-case situation with the greatest performance advantage. When it comes to popular, averaged outcomes versus what you’ll see in real-world testing, take these statements with a grain of salt.

AMD’s RSR is a new software upscaling solution based on their FidelityFX Super Resolution technology (FSR). This isn’t so much advancement of FSR as it is a global application of the technology. With RSR, AMD has designed an upscaling solution that is game and developer-neutral and can be activated at the Radeon driver level for any game that supports exclusive full-screen rendering. In comparison to FSR, this is accomplished by shifting the upscaling algorithm further down the graphics pipeline.

AMD’s video concludes with a table of endnotes confirming that the technology is only supported on RDNA and RDNA2 graphics cards at the moment (RX 5000-series and RX 6000-series, respectively). The “as of January 2022” factoid, although pure speculation, does leave the door open for older AMD architectures to get support for the technology, as well as room for additional upgrades between now and the actual launch.

Because RSR is a driver-based technology, it should help the company’s less-powerful graphics cards achieve new levels of performance. The upcoming Radeon RX 6500 XT, with its severe cost-cutting strategy, is an example of this. Because FSR requires per-game integration, there are still a small number of games that use it. RSR paves the way for AMD to use the same core technology in all games, which is undoubtedly on the company’s mind.

There is undoubtedly concern about overall quality. One of the benefits of integrating DLSS and FSR on a per-game basis is that all text and UI elements can still render at native resolution, while the 3D rendered landscape, which is typically less significant, is still upscaled. Upscaling everything, especially text, will result in a less appealing viewing experience overall, but when weighed against the potential performance gains, it may be a reasonable tradeoff. We’re excited to put the technology to the test whenever it’s accessible.

TSMC doubles its Revenue Growth at the end of 2021