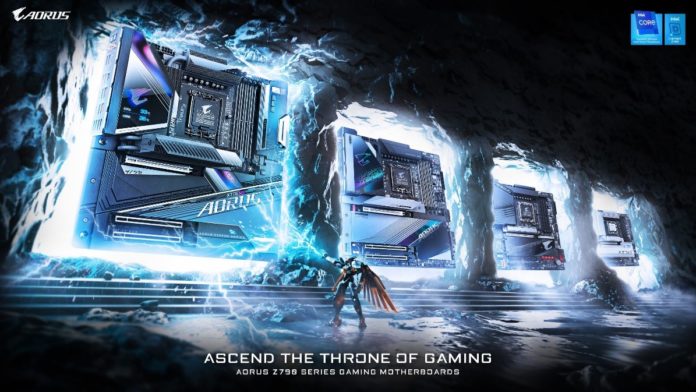 Featuring up to 20+1+2 phases of digital power VRM design with each phase holding up to 105 amps Fins-Array III heatsink design, GIGABYTE’s Z790 AORUS lineup is geared with the best power design and thermal management to unleash the extreme performance and optimized overclocking experience on the new generation multi-core K series Intel® Core™ processors.

The exclusive SMD memory slots with a metal shielding mask for anti-interference and the BIOS setting of DDR5 memory overclocking offer more stable signals to memory, which enable users to easily boost XMP and overclocking performance. GIGABYTE Z790 AORUS motherboards are completely next-gen ready and are engineered for PCIe® 5.0 graphics cards and SSDs.

In addition to strengthening the durability and signal stability by enhanced SMD slots, PCIe® and M.2 EZ-Latch technology are implemented to make it easier for users to upgrade graphics cards and M.2 SSDs, simplifying ease of access and avoiding accidental damage to the surrounding components.

The 13th gen Intel® Core™ processors carry on the design of Intel® 7 stepping and the “hybrid” architecture of P-Core and E-Core, which not only increase the amount of E-Core but also enable the processors to dynamically switch between high-performance operation and low loading energy saving mode. This allows users to flexibly take full advantage of the processors depending on the demands of system operation.

With up to 20+1+2 phases which each Vcore and Vcc GT holding up to 105 amps by its Smart Power Stage design, the flagship of GIGABYTE Z790 AORUS gaming motherboards unleashes the full potential of the new processors and enhances the extreme overclocking performance on all-core multi-cores, delivering more than 2200 Amps to provide the best power balance.

Meanwhile, it provides more stable power and dissipates heat more efficiently from heavy loading operations or overclocking to prevent CPU throttling by overheating. Furthermore, the addition of Tantalum Polymer capacitors improves the transient response of the VRM between high and low loads, increasing the purity and stability of power for processors, and providing an abundant and solid power foundation so users won’t have to worry about overlocking.

To enhance the overall heat dissipation, GIGABYTE Z790 AORUS MASTER and above motherboards feature new generation Fins-Array III technology to further enlarge the surface area of the thermal fin to 9 times more than a traditional heatsink, which allows for an increased amount of cool air to pass through for advanced heat dissipation.

GIGABYTE Z790 motherboards adopt an 8-layer and above 2OZ-copper PCB for enhanced heat dissipation under the high-speed operation of the CPU to avoid performance throttling by overheating. Besides the hardware thermal design on VRM, GIGABYTE Z790 motherboards also utilize Smart Fan 6 technology and EZ Tuning function to ensure users an optimal balance among silent, cool, and high performance.

The 13th Gen Intel® Core™ processors with Z790 chipset can take full advantage of the latest PCIe® 5.0 specifications. To meet the high-speed bandwidth required by the next generation of graphics cards, GIGABYTE Z790 AORUS motherboards implement PCIe® 5.0 design and select components for PCBs, PCIe® slots, M.2 slots, and even controllers to provide optimized signal quality and prepare for future technology.

Meanwhile, Z790 AORUS features PCIe® and M.2 EZ-Latch technology, as well as advanced EZ-Latch PLUS for the quick, detach of graphics cards and M.2 SSDs. As next-gen graphics cards grow increasingly larger in size, reaching the traditional PCIe® release latch can be difficult. PCIe® EZ-Latch and EZ-Latch Plus technology incorporates an enlarged latch and easily accessible button, making it simple to detach installed cards, and reducing the risk of accidentally damaging the board.

In addition, GIGABYTE’s exclusive next-generation SMD PCIe®x16 slots are engineered with enhanced armour providing reinforced tensile strength and robust design, which increases the shear resistance up to 2.2 times and 1.5 times on the SMD M.2 design. By M.2 EZ-Latch and EZ-Latch Plus design, the existing M.2 SSD screws are replaced by auto or manual locking latches, which reduce the troubles of screw alignment or loss and greatly simplify M.2 SSD installation.

GIGABYTE’s Z790 AORUS lineup is equipped with 2.5Gb Ethernet as the new standard with 10Gbit on flagship models, and WiFi 6E 802.11ax network for the most complete and flexible network options. Meanwhile, enhanced by DCT（Double Connect Technology）, the network traffic packet can be adjusted dynamically to reduce online gaming latency, which also optimizes streaming and immersive VR experiences, while saving users from network cable troubles.

DCT enables multiple frequency bands on the Wi-Fi 6E network, which can simultaneously connect over two Wi-Fi devices. As an example of this feature, using Airlink of Meta Quest 2 as a successful application, it can perform remote image transmission with 5GHz/6GHz while networking through routers with 2.4GHz for users to experience the Metaverse life wirelessly.

It is now easier for users to install, upgrade and manage various applications to enjoy all advantages of GIGABYTE products. GIGABYTE Z790 motherboards will be soon available in the market for users to enjoy all the exceptional features of AORUS, and to further solidify the reputation that GIGABYTE motherboards are the optimal choice of high-end and gaming motherboards. For more information, please visit the AORUS website: https://www.aorus.com/motherboards/intel-z790-series

Canada’s Alistair Johnston closing in on Celtic transfer in 2023