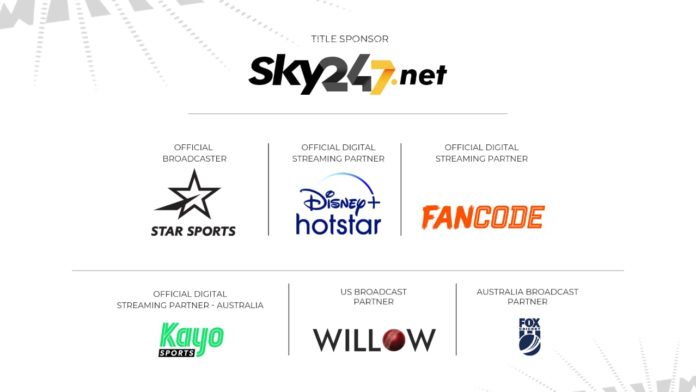 Willow TV in US and Kayo Sports, Fox Cricket in Australia are the league’s exclusively broadcaster and streaming partners

Star Sports, Disney+ Hotstar and Fancode are partners for India and the subcontinent

With the Legends League Cricket (LLC) underway in India, the spectacle of various cricketing legends playing together is set to have a global footprint as the league secures worldwide broadcast across the US, Australia and India.

Along with Star Sports, both Disney+ Hotstar and Fancode are live streaming Cricket’s biggest names from around the world simultaneously in what is a first-of-its-kind broadcast coup.

While Disney+ Hotstar enjoys a massive and hardcore cricketing fan base all over India, Fancode is a pioneering platform with more than 50 million users, it offers a unique opportunity for Sky247.net Legends League Cricket to engage with the millennials.

“Having Disney+ Hotstar and Fancode sharing broadcasting rights have never happened before but it feels great that we could do the same as our belief is to reach to maximum cricket fans and engage with them and get them closer to the icons of the game. There is a lot of excitement, be it the Cricketers themselves or the fans and we are happy that we are in the centre of this,” said Raman Raheja, CEO and Co-founder of Legends League Cricket.

Willow TV, one of the leading sports broadcasters in the United States is the league’s broadcast partner in the USA. With cricket gaining traction in the US, this league broadcast will surely provide a massive boost in expanding the popularity of the sport further.

Australia has always been one of the giants of the sport with passionate fans all over the country and Kayo Sports, their official broadcast partner together with Fox Cricket, the official digital streaming partner will propel the league and its fan base.

Talking about the significance of this global broadcast opportunity, Raman Raheja added, “The primary objective of this League has been to connect with every Cricket fan and bring forth a nostalgic factor and bring back the excitement among the fans. Huge Indian and Asian populations in US and Australia are there to be tapped along with global footprint, and we are glad that we are able to connect with them and more.”Legends of the game have assembled to play together in the Sky247.net Legends League Cricket that commenced on September 16 and will conclude on October 5, 2022. The league stage matches are currently being played in Lucknow and will be followed by Delhi, Cuttack and Jodhpur.