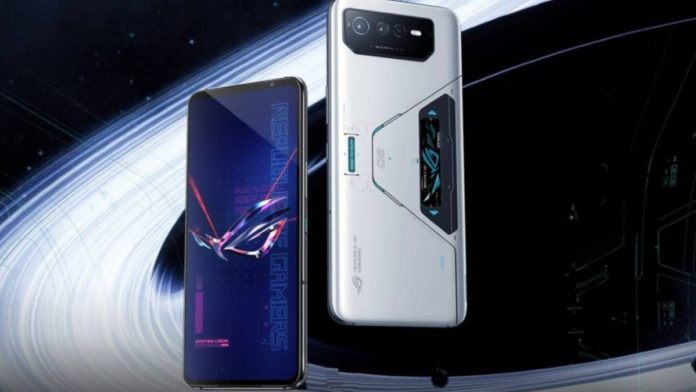 Asus ROG Phone gets a new series this week, with the launch of the ROG Phone 6D and the 6D Ultimate gaming smartphones. Asus is powering these devices with the flagship MediaTek Dimensity chipset, which is a bold call from the brand, especially by not choosing the latest Snapdragon 8 Gen 1 chipset.

The gaming lineup sees these new additions with the new hardware while other features have been picked up from the ROG Phone 6 that came out earlier in the year.

It arrives with a 6.78-inch AMOLED display with a resolution of 2448 x 1080 pixels, up to a 165Hz refresh rate, an in-screen fingerprint sensor, and Corning Gorilla Glass Victus protection. The Asus ROG Phone 6D and ROG Phone 6D are both powered by a Dimensity 9000+ SoC paired with a Mali-G710 GPU. They are equipped with high-speed LPDDR5x RAM and UFS 3.1 storage.

The standard ROG Phone 6D sports Aura RGB lighting on the back panel that offers up to 16.77 million colour options. Meanwhile, the ROG Phone 6D Ultimate features a 2-inch OLED display on the back that can notify users of incoming calls, charging status, and more. Users can also create custom animations for the display.

There’s a triple camera system on the rear comprising a 50MP Sony IMX766 primary sensor, a 13MP ultra-wide unit, and a 5MP macro snapper. While the front of the phones nests a 12MP shooter for selfies and video calls.

It runs on Android 12 and the company has promised two OS upgrades and up to 2 years of security updates. The ROG Phone 6D and ROG Phone 6D Ultimate are 5G handsets that also support Wi-Fi 6E, Bluetooth v5.3, and NFC connectivity. They also feature a USB Type-C port and a 3.5mm headphone jack.

The Asus ROG Phone 6D series comes in a single Space Gray color option. It will retail at the following price tags in the UK in the coming weeks. The Asus ROG Phone 6D with AURA RGB lighting pricing starts from EUR 949 (roughly Rs. 75,500), and the handset will offer up to 16GB of RAM and 256GB of inbuilt storage. The company is yet to disclose the price in other markets. However, it has been confirmed that these two handsets will not be sold in North America.

The Asus ROG Phone 6D Ultimate comes with the same design as the ROG Phone 6 and the Phone 6 Pro and features a secondary display at the back. The difference is the new Space Grey matte finish. The main display is rated at 6.78-inch. It has the Samsung AMOLED panel, support for a 165Hz refresh rate, and a 720Hz touch sampling rate. There’s also support for Delta-E < 1 color accuracy, HDR10+, and DC Dimming. The 2-inch OLED matrix color display can show various animations and alerts too.

The Dimensity 9000+ chipset makes way for the MediaTek HyperEngine 5.0. it is based on Android 12 and packs 512GB of inbuilt storage. A 6,000mAh battery is there with support for PD Charging and a 65W adaptor. The phone comes with AirTrigger 6 with ultrasonic sensors and various gestures. The X-axis linear motor allows for up to a 130 Hz vibration frequency for an enhanced gaming experience. The ROG Phone 6D Ultimate also supports the all-new 360-degree CPU Cooling tech.