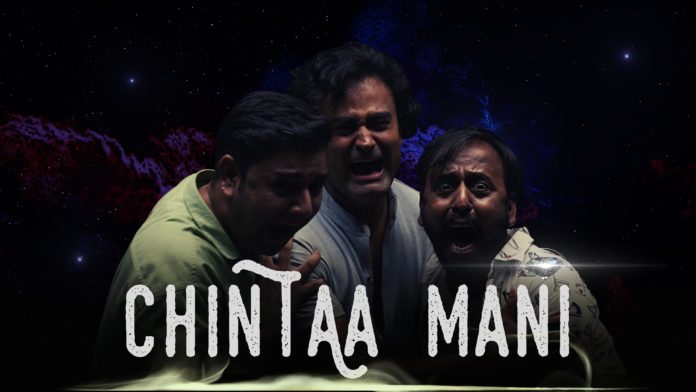 We all must have heard innumerable times the tale of a poor young boy, Aladdin, who was left stranded inside a cave by a cunning magician. However, what Aladdin got hold of inside the cave was a magical lamp, wherein resided a genie who brought all happiness and affluence. But what if it were a devil instead of the angelic host inside the lamp, and what possible fate would have Aladdin met if things went south?

Chintaa Mani, a tale of magic and misfortune now streaming on Disney+ Hotstar, is set to take you on such uncharted mystically thrilling experience, with a mix of sci-fi, supernatural and a hint of humour.

The third Saints Art and Kahanikaar Sudhanshu Rai Original is a story about three friends who get hold of a magical stone – Mani – that possesses the power to foretell the future. It starts with a young man Chiku, played by Sudhanshu Rai, en route his friend’s house for a fun-filled evening. Pestered by his pals Komal and Ballu (played by Abhishek Sonpaliya and Akhlaq Ahmad Azad, respectively) to hurry, he takes a shortcut that goes via a deserted factory where he encounters a vagabond, played by Shobhit Sujay, who offers him the magical stone. Wasting no time, Chiku procures it in exchange of some cash and rushes to his friends, but what follows is something beyond their scariest of dreams.

Writer-Producer Puneet Sharma, who has donned the hat of Director for the film said, “I have always been inspired by world cinema and the exceptional charm of the old school of filmmaking. Chintaa Mani is an attempt by us to reinvigorate the same charm in a contemporary setup in a way that it’s relatable for the Indian audience. We are hopeful of even more love and adulation than we received for our previous projects.”

Elaborating further on what’s in store for the audience in Chintaa Mani, storyteller-filmmaker Sudhanshu Rai added, “Even as previous Saints Art Originals, Chaipatti and Detective Boomrah, were distinctive in their own ways, Chintaa Mani is the most experimental offering from our banner till date. It is an extremely rare combination of multiple genres and sub genres such as comedy, horror, thriller and supernatural, and thus bound to offer the audience an unprecedented experience.”

Chintaa Mani has been written by Sudhanshu Rai while its Director of Photography is Sparsh Hasija. The short film has been edited by Saurabh Rawat while the background score and sound has been designed by Pranav Arora (Praosh). The colorist for the sci-fi thriller is Yash Soni.

Man of Pause: In this trailer, Time has Become the main Antagonist

Bhediya: Everything We know about Varun Dhawan and Kriti Sanon’s creature Drama film

The Ghost:  Nagarjuna has come with Sonal Chauhan in the film