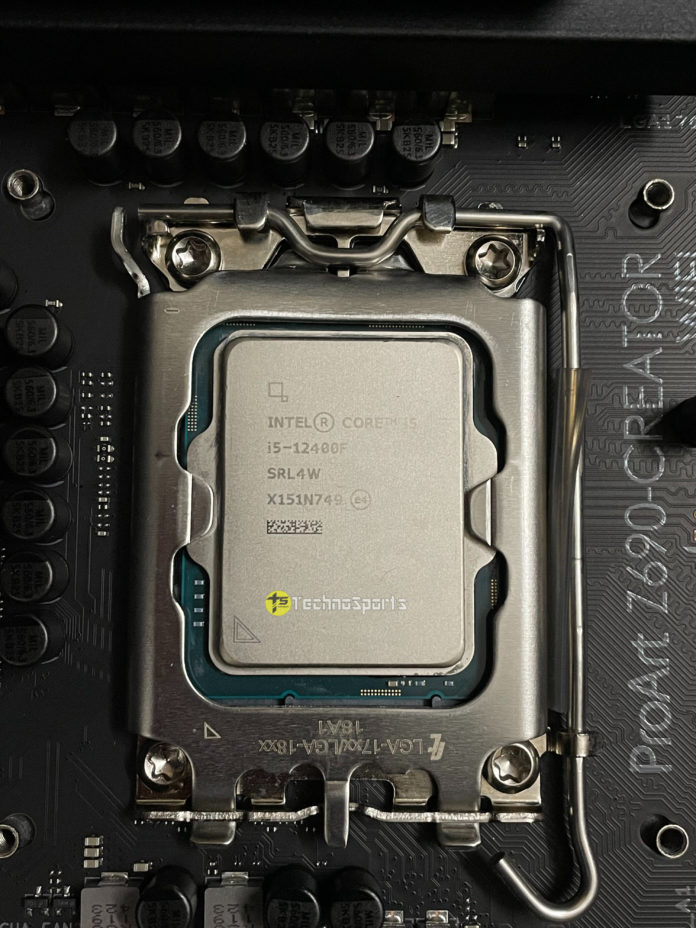 Intel has launched its 12th Gen processors for quite some time now and we have an adequate amount of CPUs, of course, this is the best time to go for the ecosystem to make these new Gaming PCs as GPU prices have dropped drastically then what it was at the start of 2022.

So, Intel as always sent us their budget Core i5-12400F to review very swiftly and here we will talk about it, also explore its synthetic performance and in gaming as well. Currently, this “F” variant that lacks iGPU retails around for Rs.15k and the highly lauded Ryzen 5 5600X along with Ryzen 5 5600 comes if you spend Rs.2k-3k more.

Now, you might get confused with this heavy competition between both giants while equally benefiting from the performance gains that each CPU makers bring onboard. However, this 6-core Core i5-12400F lacks the P-core and E-core treatment that Intel has provided even on its brother Core i5-12600K, which by far is one of the best CPUs we tested.

Knowing all this, should you go for this Intel Core i5-12400F processor? Let’s show you how this 6-core chip performed in our tests and see if it’s worth going down the root:

Having 6-cores in 2022 on a budget CPU is normal because we are not far away to see quad-cores getting replaced by Hexa-cores and these 6-core CPUs getting replaced by 8-core ones. As of now say you want to make a Gaming/Productivity PC to get through your everyday needs of basic to medium-end workload, will this Core i5-12400F match up?

The anxiety of yours might obviously be natural but if you don’t know, these 6-core processors are extremely powerful and edge the 8-core chips. Also, they are far more efficient in drawing 65W base TDP and you have enough headroom to push the CPU if needed, however, you miss overclocking capabilities which the Ryzen 5 5600 or 5600X has.

As you see in the benchmarks the Core i5-12400F easily closes in with the Ryzen 5 5600X while surpassing the AMD processor in some benchmarks as well. The single-core performance of this 12th Gen Intel CPU is considerably higher than the Ryzen 5s in the segment, which goes to show how good value it provides for its price.

With 12 threads, this processor can be used for basic to medium-end workloads and pairing it with faster DDR5 RAM will definitely give the best results. Obviously, this Intel Core i5 12400F is not as super-efficient as you expect the Ryzen 5 5600X to be and lacks overclocking but has its own advantages of a much modern platform with DDR5 RAM and PCI Gen 5 support.

While in productivity you might find this Core i5 12400F very competitive or near to the Ryzen 5s but when you come to gaming, this is a really strong side of Intel obviously. If you pair this with say an RTX 3060 Ti we used here you can expect solid 1440p gaming or even 1080p gaming performance thanks to the single-core improvements by Intel.

This is a key reason why opting for a newer Intel Core i5 processor makes sense and if you can get this Core i5-12400F at discounted rates as time moves on.

Here are some gaming benchmarks with this Intel Core i5-12400F processor paired with an RTX 3060 Ti:

In the benchmarks you see, expect 60FPS+ performance even at Ultra in games like Assassin’s Creed Valhalla even if it’s at 1440p. Get consistently high frame rates in modern games be it triple-A titles or even battle royals, so for gamers, this is a highly-recommended processor.

If you are desperate to buy a great Gaming CPU in that Rs.15k price segment and willing to opt for a newer platform, this Intel Core i5-12400F is definitely worth considering.

As you see in both the productivity and gaming benchmarks, the Core i5-12400F performs very well and gives one of the best price-to-performance ratios. With new features built into the LGA 1700 socket motherboards, opting for a newer platform makes sense if you are planning to use the gaming PC for some years down the road.

Obviously, this one misses on overclocking which you get on the Ryzen 5s, making this Core i5 not-so-special as it’s more of an upgrade over its 11th Gen counterpart, but, because of deep discounts, getting an Intel Core i5 12400F might be tempting a bit.

Also, as the platform costs of the new 12th gen chips have drastically dropped and DDR5 RAMs have got cheaper relatively, spending on Intel is a better choice, on the other hand, AMD’s platform costs are really low. Now, at the end of the day, indeed this Intel Core i5-12400F processor is definitely a route worth considering but the end decision is up to your personal choice.

Intel Core i5-12400F review: Tough on budget, a great Ryzen 5 5600X alternative Intel has launched its 12th Gen processors for quite some time now and we have an adequate amount of CPUs, of course, this is the best time to go for the ecosystem to make these new Gaming PCs as GPU prices have dropped drastically...