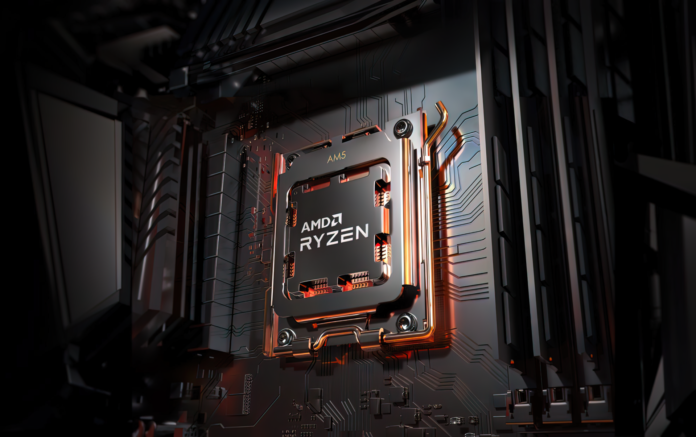 During a presentation in China, AMD appears to have announced the release and widespread availability of their next-generation Ryzen 7000 Desktop CPUs and AM5 motherboards. According to a presentation slide shown at the event, AMD AM5 socketed motherboards and Ryzen 7000 Desktop CPUs will be available on September 15th, just in time for the Fall 2022 launch AMD has previously quoted for its next-generation processors.

The AMD Ryzen 7000 processors will be based on the Zen 4 core architecture, which is predicted to enhance IPC by 8-10%. The CPUs will keep the chiplet design and high-core counts. The Ryzen 7000 CPUs will use two Zen 4 CCDs (Core Complex Dies) based on TSMC’s 5nm process and a single I/O die (IOD) based on TSMC’s 6nm production node. The maximum number of cores and threads will stay at 16, but clock speeds will be greatly raised, with sources claiming clock speeds of up to 5.85 GHz.

As demonstrated at Computex 2022, AMD expects that their Ryzen 7000 Desktop CPUs with Zen 4 cores will surpass Zen 3 by roughly 15% single-threaded and achieve clock speeds of around 5.5 GHz. A Zen 4 Ryzen 7000 CPU with multiple cores operating at 5.5 GHz was used in the demo.

The CPUs will also have an RDNA 2 iGPU, which will be available via HDMI 2.1 FRL and DP 1.4 ports on the latest AM5 motherboards. In addition to the CPU and GPU, there will be an additional instruction set for AI acceleration.

The AMD Ryzen 7000 Desktop CPUs will have a precise square design (45x45mm), but an incorporated heat spreader that is extremely choky (IHS). The CPUs will be the same length, width, and height as current Ryzen Desktop CPUs, and they will be sealed on all sides to keep thermal paste out of the IHS.

The AMD AM5 CPU platform will have six different TDP segments, beginning with the flagship 170W CPU class, which is suggested for liquid coolers (280mm or higher). It appears that this chip will be aggressively clocked, with higher voltages and support for CPU overclocking. This is followed by 120W TDP CPUs, which need be cooled with a high-performance air cooler. The 45-105W variations are categorized as SR1/SR2a/SR4 thermal segments, which indicates they’ll only need conventional heatsink solutions when running in stock mode, so they won’t need much additional to stay cool.

The AMD Ryzen 7000 Desktop CPUs are expected to ship this fall, which means the earliest we’ll see the chips in action would be September 2022, which appears to be the case according to this recent leak. It’s odd because motherboard manufacturers have mostly finished developing their future X670E, X670, and B650 products, which are currently being revealed. For the first time on an AMD CPU-powered platform, the new platform will offer DDR5 and PCIe Gen 5.0.

Previous articleSpaceX: Employees voice their Displeasure against Musk, Get Fired!
Next articleThank God: Ajay Devgn’s new movie is all set to release this Diwali