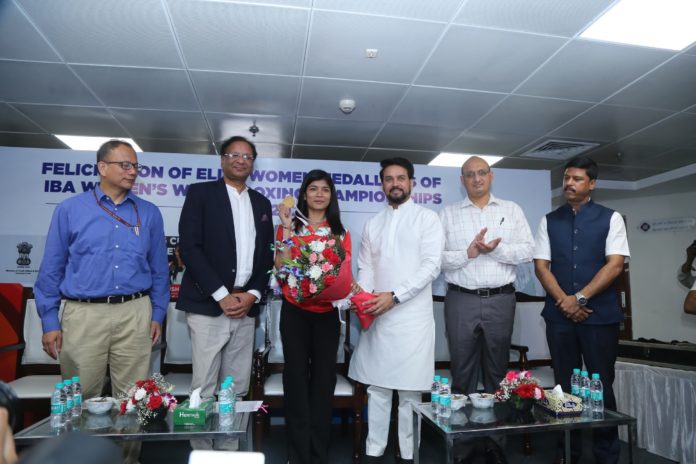 The event was attended by the Union Sports Minister Anurag Thakur, BFI President Ajay Singh and DG SAI Sandeep Pradhan among other officials

New Delhi, May 24, 2022: The Boxing Federation of India (BFI) and Sports Authority of India (SAI) on Tuesday felicitated all three medal winners of the 12th IBA Women’s World Boxing Championships at the Indira Gandhi Stadium in New Delhi, which was also attended by the Union Sports Minister Anurag Thakur.

With one gold and two bronze medals from the prestigious tournament, the Indian team secured the third position in the team rankings with 23 points after Turkey (48 points) and Ireland (23 points) who finished first and second respectively.

While speaking at the felicitation ceremony, the Sports Minister Anurag Singh Thakur congratulated the medal winners and said that we must celebrate current achievements but always keep aiming for the next championship.

“Our betis (daughters) have made us proud. There was a time when Hon’ble Prime Minister Shri Narendra Modi used to speak about Beti Bachao, Beti Padhao and now it’s bearing fruit. Nikhat said she doesn’t want to stop; she wants to win more medals. We need this passion and dedication from you all. We have to keep going forward. You are the inspiration for grassroots athletes. The TOPS scheme has ensured everyone gets the facilities. We must celebrate what we have achieved today but always aim for the next big Championships. Let’s bring more medals for India in 2024,” the Minister said.

“It’s really great that you’ve done so well at the World Championships but this is not where we have to stop. This entire exercise we have is about the Olympics which are just two years away. A huge vote of thanks to the Ministry of Sports and Sports Authority of India for all their support,” BFI President Ajay Singh said.

Clinching their maiden medals at the world’s biggest boxing tournament, Nikhat Zareen (52kg) became the country’s only fifth woman to win gold while Manisha (57kg) and Parveen (63kg) bagged bronze medals at the event, which concluded in Istanbul last week.

In what was celebrated as the 20th anniversary of the Women’s World Championships, the Indian team added three medals in Istanbul to take its overall tally to 39—the third-highest after Russia’s 60 and China’s 50 medals.

Previous articleIPL 2022: Gujarat Titans defeat Rajasthan Royals by 7 wickets to qualify for their first-ever IPL final
Next articleESET launches a global search for ‘Heroes of Progress’, looking for the most progressive minds of the 21st century

Manny Pacquiao Has officially announced his retirement from Boxing