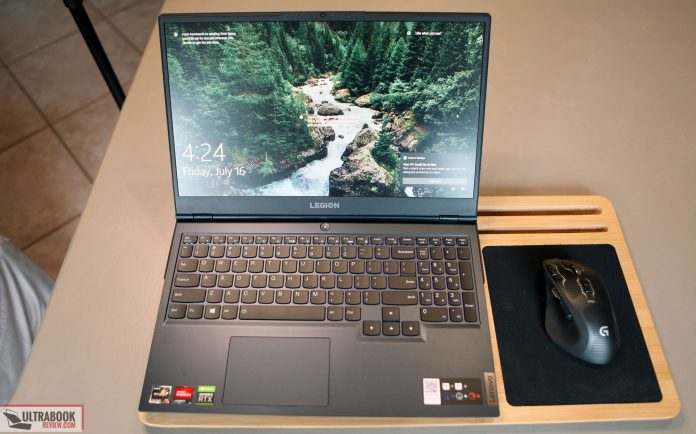 Lenovo’s Legion 5 is undoubtedly one of the best gaming laptops manufactured by Lenovo and things have just gotten better. Earlier we had talked about this year’s Legion 5 which sports new AMD Ryzen 5000H processors and the CPUs are paired with new RTX 30-series GPUs.

In terms of design, we didn’t find much change about the device however the display didn’t disappoint. As the display now is more color accurate and covers 100% sRGB color gamut, featuring Dolby Vision as well as both Free-Sync and G-Sync support.

Let’s talk about the main hardware, we get the 8 core, 16 thread AMD Ryzen 7 5800H processor which comes paired with RTX 3060 Max-P variant for better performance. And it is supported by 16GB 3200MHz DDR4 RAM which can be further expanded to 32GB and we get 1 TB PCIe SSD storage.

Yes, with the arrival of AMD’s Radeon 6000M series it’s time we see the lineup of AMD and NVIDIA battle it out at the laptop gaming arena. However, the Ryzen 7 5800H + RX 6600M combination will be a little costly than the RTX 3060 variant, but the reason for that is unknown.

The Lenovo Legion 5 offers a total of four display variants to choose from, but the exact panel specifications for Germany are not known at this point. Its other specifications include, a 15.6-inch 300-nit FHD panel with 165 Hz with FreeSync and we get a plethora of ports including 2x USB 3.2 Gen2 Type-C, 4x USB 3.2 Gen1 Type-A, 1x HDMI 2.1-out, 1x Gigabit Ethernet, and a combo audio jack.

In terms of connectivity we get, both 2×2 WiFi 6 and Bluetooth 5.1 support and the device comes with a 4 cell 80Wh battery that promises up to 9 hours of battery life.