Aafat-E-Ishq: Trailer released; All details about the cast and release date 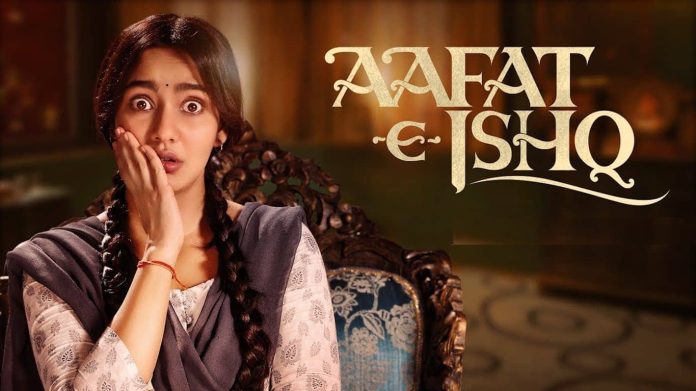 Aafat-E-Ishq trailer is out now. Aafat-e-Ishq is an upcoming dark-comedy and thriller-based film. It is directed by Indrajit Nattoji and is produced by the production company named Zee Studios. The shooting of the film was started in Nashik during the Covid-19 period.

The trailer of the film Aafat-e-Ishq was released by ZEE5 on Monday i.e. 18th October 2021. The trailer first shows us a typical small-town rom-com but suddenly it turned into a thrilling ride that left the audience bewildered with its twists and turns. This film is basically a remake of a Hungarian film named Liza, the Foxy-Fairy.

In the trailer, we have seen Neha Sharma playing the role of Lallo, a naive sweet girl who is on a quest to find true love. Her friend has suggested using a dating app, and soon after that, she found herself on a string of dates. However, each one of them ends in a tragedy, with the suitors dying in freak accidents. Meanwhile, Lallo has become the prime suspect, Ila Arun, who presumably plays her grandmother, is quick to draw comparison with the old pulp novel where suitors of Laal Pari, a fabled cursed woman, died as soon as they fell in love with her. So, there lies a question that whether Lallo is, cursed or is there more to Lallo’s story than what we have seen through eyes or not?

Neha Sharma has shared and said that she was excited to bag the film. She said Lallo is so different from the characters she has played before. In a statement, the actor said, “Lallo is from a small town in the India heartland, so I had to work hard on getting the local dialect and Hindi diction right. I also had to go through a makeover as I will be seen in a completely de-glam role. However, it was one of the most satisfying characters to play as Lallo is so unique and one of a kind.”

The director Indrajit Nattoji further added, “Aafat-E-Ishq is my Indian heartland version of ‘Liza, the Fox-Fairy’. I can safely say that Aafat-E-Ishq is an adaptation and not a remake. A reboot with some new twists, eclectic original music, and quirky small-town Indian characters. I hope the film catches the audience’s imagination and succeeds in entertaining them, something we all need as we slowly emerge from a devastating pandemic”.

- Advertisement -
Powered by JustWatch
Share
Facebook
Twitter
Pinterest
WhatsApp
Linkedin
Previous articleAMD Radeon™ Software Adrenalin 21.10.3 brings up to 21% better performance in Marvel’s Guardians of the Galaxy
Next article“The Summit of the Gods”: All details about the Netflix animated film