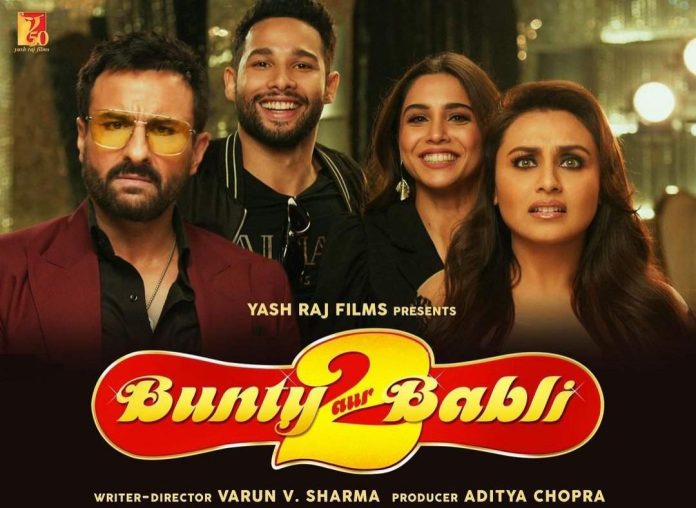 Bunty Aur Babli 2 is an upcoming crime comedy film. The most anticipated trailer of the movie is out now. It is produced by Aditya Chopra and its production company is Yash Raj Films and directed by Varun V. Sharma, he is making his debut as director and is serving us a spiritual sequel to a 2005 film named Bunty Aur Babli.

The trailer of Bunty Aur Babli 2 releases today i.e. on 25th October 2021. The trailer shows us four lead characters of the movie dressed in several disguises as they move out in order to deceive people in their own styles. The trailer is fully loaded with powerful performances by Saif Ali Khan, Rani Mukherjee, Siddhant Chaturvedi, and Sharvari.

The trailer shows us “OGs” Bunty and Babli who are leading a dull and typical middle-class life with their son. The conman Bunty has now get transformed into a railway ticket collector, both of them have left their cons business back in the past. But, their simple life’s duration does not long, it gets interrupted by Siddhant Chaturvedi and Sharvari, who have become the new cons on the block.

Both of them are carrying out their robberies and frauds in the name of Bunty and Babli which has been shut in the past and both original Bunty and Babli are not okay with it.

While talking about the film, Saif Ali Khan has said, “Films on con jobs have historically had great disguises and that’s half the fun. Nowadays we have prosthetics and makeup of a totally different level so people can expect really amazing get-ups and disguises from the cast and doing all that was a lot of fun.”

Meanwhile, Rani Mukherjee elaborates more about the film’s story. She said, “Both sets of con-couples are extremely intelligent. They are the best when it comes to wearing disguises because they are the best at conning people with this skill. In this film, they come face to face with each other and it’s a battle to watch out for!”

Siddhant has also said that “I have played so many avatars in just one film! When you do a film like Bunty Aur Babli, you promise people that they will get to see the lead actors in disguises to pull off elaborate cons and this film will over-deliver in this regard.”

The movie Bunty Aur Babli 2 is going to be released in theatres on 19th November 2021.