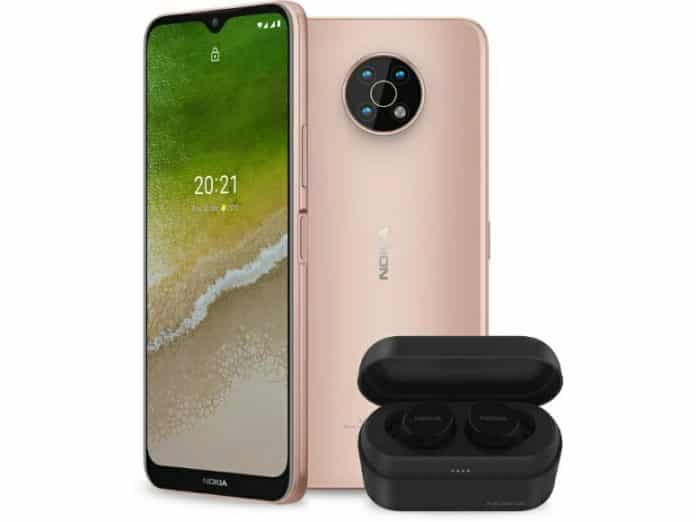 Nokia is gearing up for the launch of a new 5G smartphone. The company recently launched the G20 4G smartphone in India. It looks like another smartphone from the house of Nokia is launching soon. The Nokia G50 5G launch is imminent. According to reports, the device will debut in early October. HMD Global, the parent company of Nokia mobiles, is yet to confirm the official launch date. Meanwhile, the phone has visited the FCC website ahead of the official launch. The listing reveals the device’s model number and the charging details. Let’s take a look at the Nokia G50 5G specifications, features and other details leaked ahead of the launch.

The listing reveals that the device has the model numbers TA-1390 and TA-1370. The Nokia G50 5G will likely feature a waterdrop notch design, a prominent chin, and a side-mounted fingerprint sensor for secure authentication of biometric data. On the rear, it shall have a circular camera unit. There is also another button on the left edge, which could be used for invoking the Google Assistant. The device might bear a 6.38-inch HD+ (720×1560 pixels) IPS LCD screen with an aspect ratio of 19.5:9 and a pixel density of 269ppi.

The Nokia G50 5G will draw power from a Snapdragon 480 processor, combined with 4GB of RAM and up to 128GB of storage. The Nokia G50 5G is expected to sport a triple rear camera setup comprising a 48MP primary shooter, a 5MP ultra-wide sensor, and a 2MP depth lens. On the front, there will be an 8MP selfie snapper.

The Nokia G50 5G is tipped to carry a price-tag of around €259 (roughly Rs. 22,400). However, the official prices will be announced at the time of launch, which could happen in the coming weeks.