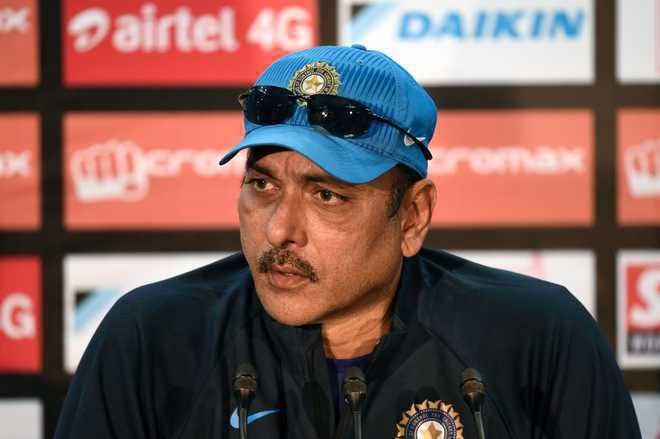 Ravi Shastri who is currently the Indian Head Coach has declared that he will step down from his role after the end of the T20 World cup this October. He made this announcement during an interview with the Guardian.

There were rumours surrounding his exit from the Indian side as the head coach earlier this month after he refused to extend his contract. Thus he has finally confirmed his exit by quoting “Never overstay your welcome.”

“I believe so because I’ve achieved all I wanted. Five years as No 1 in Test cricket, to win in Australia twice, to win in England. I spoke to Michael Atherton earlier this summer and said: ‘For me, this is the ultimate – to beat Australia in Australia and win in England in Covid times.’ We lead England 2-1 and the way we played at Lord’s and the Oval was special,”

The Indian Head Coach also added that “We’ve also beaten every country in the world in their own backyard in white-ball cricket. If we win the T20 World Cup that will be the icing on the cake. There is nothing more. I believe one thing – never overstay your welcome. And I would say that, in terms of what I wanted to get out of the side, I’ve over-achieved. To beat Australia away and to lead the series in England in a Covid year? It is the most satisfying moment of my four decades in cricket.”

Also Read: Pakistan vs New Zealand Tour Cancelled: New Zealand Cricket board Back Out of the Tour due to security concerns of their players

Ravi Shastri believes that there should be fewer T20 Bilateral series between International teams to reduce the burden of the players.

“I would like to see less and less bilateral T20 cricket. Look at football. You have the Premier League, the Spanish league, the Italian league, the German league. They all come together for the Champions League. There are few bilateral football friendlies now. The national teams only play for the World Cup or World Cup qualifying and other major tournaments like the European Championships, Copa America and the Africa Cup of Nations.

I think that’s the way T20 cricket should go. Spread the game in different countries, and take it to the Olympics. But cut down on those bilateral games and give time for the players to rest, recuperate and play Test cricket.”

They (Team India players) all believe the same. There is enough franchised cricket. That is working. But what is the point of bilateral? In my seven years with this Indian team, I don’t remember one white-ball game. If you win a World Cup final you will remember it and that’s the only thing left for me as a coach. Otherwise, you bloody cleaned up everything across the globe. I don’t remember a single white-ball game.

Test matches? I remember every ball. Everything. But the volume is too much. We beat Australia 3-0 in the T20 series. We beat New Zealand 5-0 in New Zealand. Who cares? But beating Australia in two-Test series in Australia? Winning Tests in England? I remember that.”

Ravi Shastri’s point makes a lot of sense as there are a lot of T20 fixtures that make the players drained out during the longer formats of the game. As a result, teams tend to make a lot of changes to their squads which results in a lot of frustration for cricket fans all around the world.

Comment below if you agree with Ravi Shastri’s point of view regarding the reduction of bilateral T20 cricket.

Previous articleMino Raiola provides an update on Paul Pogba’s possible departure from Manchester United
Next articlePele is in Semi-Intensive’ Care and He’s Doing Well, according to His Daughter