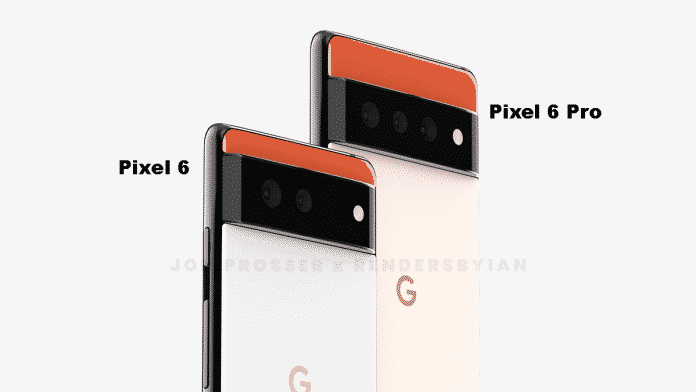 Jon Prosser has again revealed something incredible for which we have been waiting for a long time. Well, there were some leaks about this earlier but Job Prosser made it really clear that Google is now focusing more on their Pixel 6 series. Yes, this time we saw the leaks of the Google Pixel 6 and Pixel 6 Pro on his YouTube channel. The design you will see is unique and has no reference so far, and it seems totally new.

So we are providing all the images here and will continue discussing the phone further. So to make it clear, the Google Pixel 6 series will have two smartphones – Pixel 6 and Pixel 6 Pro. Seemingly, Google is not using the ‘XL’ word for the bigger model but is now switching to ‘Pro’.

So the main difference you need to know between Pixel 6 and Pixel 6 Pro is that the Pro is bigger and it will have triple rear cameras setup at the back, unlike a dual-camera setup in the Pixel 6.

Both the devices will have very thin bezels on all sides around the display. We can see a center-aligned punch-hole camera at the top of the display and both of them will have an in-display fingerprint scanner. Apart from this, we can see a serious camera bump for the rear camera module which might be an issue for some, but for us, it kind of looks unique and is something that makes it different from others.

Now coming to the colour of the smartphone, according to Prosser, the smartphone will have a dual-tone design where the real images which he received have an orange-white design at the back. Another colour which he mentions is a golden model, the golden colour is applied in place of the orange colour and he added that the golden model seems costly. The last thing he added was about the wallpaper which he claims to be the exact same in his renders and what he saw in real images.

Though he has not mentioned any specifications of the smartphones but has mentioned that why Google is re-designing its next Pixel series. A report claimed that Google is reportedly working on its own smartphone silicon which is allegedly known as ‘GS101’. He thinks that as Google is making its own silicon for smartphones then it might add them in its next device which is pretty much logical and so a new revamped design will also fit the same vibe with it.