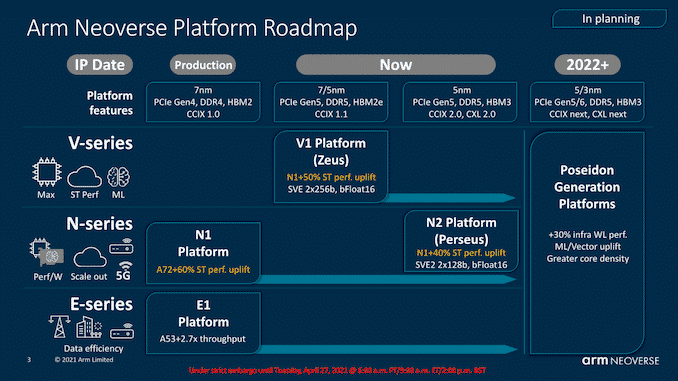 In the year 2019 Arm first introduced its Neoverse N1 and in the year 2020, this line of CPU microarchitectures hit the market in the form of Amazon’s new Graviton2 design as well as the Ampere Altra server processors.

Early it was rather difficult for Arms CPUs to compete against the likes of Intel and AMD. However, in 2021, the newest Neoverse N1 implemented in designs such as the Ampere Altra is beating the newest generation AMD or Intel designs.

Arm stated that its main priority with the Neoverse line of products is gaining cloud footprint deployment market share. And the company is succeeding at the idea; one example of the fact is that in Amazon’s own AWS instance additions throughout 2020, the new Arm-based Graviton2 is said to be the dominant hardware deployment, picking up the majority of share that Intel is losing.

Last September, Arm teased a few new designs of its new Neoverse V1 and Neoverse N2 generation of products. However, it didn’t provide any more concrete details about the new microarchitectures. Following last month’s announcement of the Armv9 architecture, it’s time to dive into the two new CPU microarchitectures as well as the new CMN-700 mesh network.

According to sources, the Neoverse V1 is a CPU microarchitecture that aims itself for more HPC-like workloads and designs oriented towards such markets, while the Neoverse N2 is more of a straight-up successor to the Neoverse N1.

The Neoverse V1 focuses on maximized performance at lower efficiency, with features such as wider SIMD units (2x256b SVE), and the N2 has the best power efficiency while still moving forward performance through generational IPC improvements.