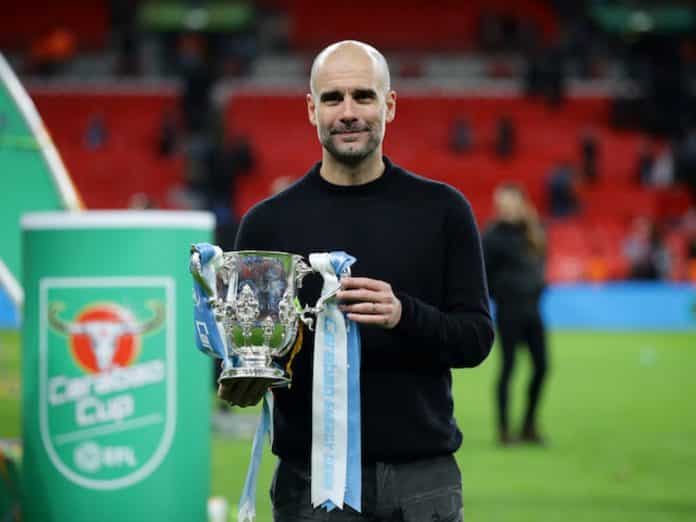 Manchester City won the EFL League Cup for the fourth consecutive time. They beat newly appointed manager Ryan Mason’s Tottenham Hotspur by 1-0 at Wembley Stadium. There were 8,000 fans in attendance for the finals of the cup, which made it more special.

Pep Guardiola became the first manager to win four consecutive English League Cup titles in history. His tally of 4 is also the highest League Cups won by a manager. He is level with Brian Clough, Alex Ferguson and Jose Mourinho.

The Spaniard has been very special for Manchester City. He has led City’s dominance in the Premier League and is also on course for a Premier League and Champions League double. City are on top of the Premier League table and are also into the UCL semi-finals. They will face PSG and hopefully Real Madrid or Chelsea in the finals. It is one of the best chances for Guardiola to lift the European trophy after such a big gap, considering his managerial genius.

Manchester City players’ Fernandinho and Sergio Aguero also became the first players in history to win the English League Cup six times. The Argentinian didn’t make an appearance, while the midfielder donned the armband since starting the game. But sadly, both are set to leave the club at the end of the season, and what a way it was to pen the end to their final chapter in the Blue shirt.