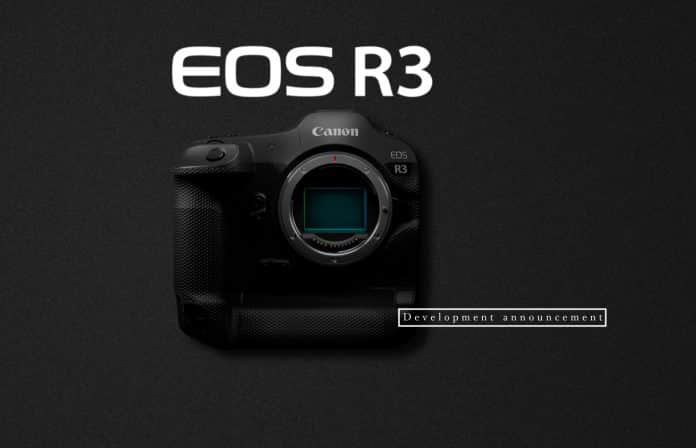 Still being in development, we don’t have many details about the new camera. However, it’ll be positioned above the EOS R5, which is currently Canon’s flagship mirrorless camera.

According to sources, much similar to Nikon’s upcoming Z9, the EOS R3 will be a hefty camera with a built-in vertical grip for shooting in portrait and landscape orientations. The body design and control layout will be similar to the EOS-1D X Mark III, Canon’s highest-end pro DSLR. It will also be dust and water-resistant.

According to the manufacturer Canon, the EOS R3 will be the first camera to use a new 35mm full-frame stacked CMOS sensor with backside illumination. The camera’s new image processor and the electronic shutter will allow for 30fps shooting with AF and AE tracking.

The EOS R3 is even acclaimed to have autofocus capabilities as well and it will be the first digital camera from the company with eye-control AF. Canon has used a deep-learning algorithm to improve the recognition of human subjects from the torso up, which will help in challenging situations like sports photography.

As for other details regarding Canon’s new camera is not yet known, all we know is that with Canon announcing its new camera, the pro mirrorless camera wars are heating up. Nikon’s Z9 and Sony’s new A1, along with Canon’s EOS R3, it seems that all the beasts are ready to rumble.