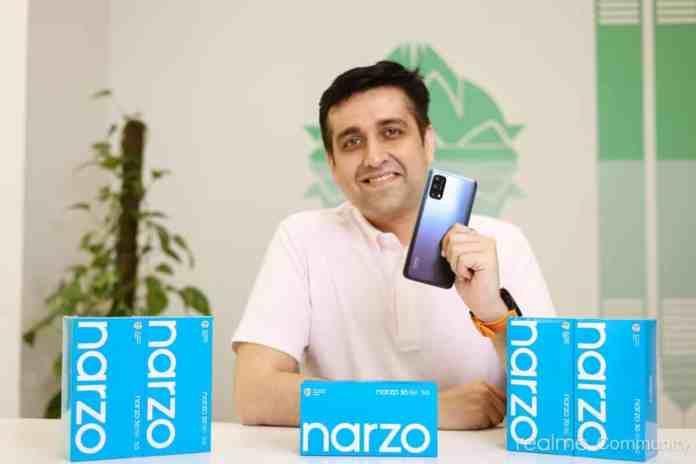 First of all let us remind you that Realme is launching the Narzo 30 Pro 5G and Narzo 30A smartphones on 24th February, which is after a couple of days. A few days ago Madhav tweeted hinting at a new cheaper 5G smartphone launch in India. Cheaper in relative to Realme X7 5G which is the cheapest 5G phone in India priced at Rs.19,999 for the base variant. So, talking about anoher smartphone that willbe cheaper than this one might have to be priced lower than the previously mentioned price point.

Realme Narzo 30 Pro 5G is already been rumored to be a cheaper 5G smartphone and we suppose that it can be priced anything but less than Realme X7 5G. So, recently a leaked image of the retail box of Realme Narzo 30 Pro 5G with the price printed on it has been spotted. So guess what was the box price on it, it is ₹16,999 for the 6GB RAM + 64GB storage variant. This means that the selling price will be around ₹14,999 or ₹15,999.

According to the leaked image the box reveals some information about the phone. The box says 6.5inch LCD, 5000mAh battery, 183gram weight, triple rear camera 48+8+2MP and a 16MP front camera.

According to Gadgetsdata, Realme Narzo 30 Pro 5G and Narzo 30A both will have Android 10 with RealmeUI 1.0. Disappointingly, the Narzo 30 Pro 5G has a Hybrid sim slot which means there will be room for 2 SIMs at a time or one SIM and a micro SD card. Apart from this Narzo 30A is most probably coming with a USB C charging port.