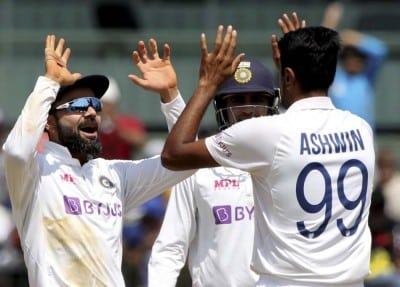 India made a formidable comeback levelling the series 1-1 by crushing England after losing the 1st Test. England failed to cross even 200 runs in any of their innings. After India won the toss, Rohit Sharma was in terrific form and hit a century as the Men In Blue reached 329, England was sent back for 134 with Ravichandran Ashwin making it easier alongside taking his 29th five-wicket haul.

In the second innings, R.Ashwin scored an indelible century, which is his fifth in this longest format, and helped India to challenge England with a massive score target of 482 runs to win. India sent back England in their second innings within 55 overs as the Men in Blue bowled out England for 164. By winning this Test, India not only levelled series by1-1 but also the hope for a final spot at the inaugural ICC World Test Championship, which is set to be played later this year.

Kuldeep played a vital role in the second Test, as he struck and removed the big-hitter, Moeen Ali who was stumped on 43 off 18, where Kuldeep finished with 2 wickets of 25 runs.

R. Ashwin led the team towards the win beautifully with his all-around brilliance in the second Test in Chennai, Local superstar Ashwin, who took eight wickets in the match and scored a startling century on that tricky pitch of Chennai as India concluded the game in four days. R. Ashwin was also handed the Man of the Match for the second Test which is certainly deserving.

Rohit Sharma came back in his form and proved why he is called ‘Hitman’ as he made his seventh Test century, and Axar Patel, the debutant took a maiden five-wicket haul. There were other key factors that gave the home side advantage as they dominated the visitors throughout the game.

England started Day 4 with 53 runs off 3 wickets, chasing the massive score of 482 runs, and Ashwin made a quick impact as he deceived Dan Lawrence with his first delivery of the day as Rishabh Pant completed a neat stumping.

Ben Stokes, later on, joined the England skipper Joe Root to give some support and resistance for the visitors, but Ashwin, who led India’s bowling lineup, again broke the partnership as he caught Stokes at slip.

Ollie Pope soon was sent back, as he made a mistake of a sweep off Axar Patel to Ishant Sharma at mid-wicket.

However, India with this win has moved up to second in the World Test Championship table.