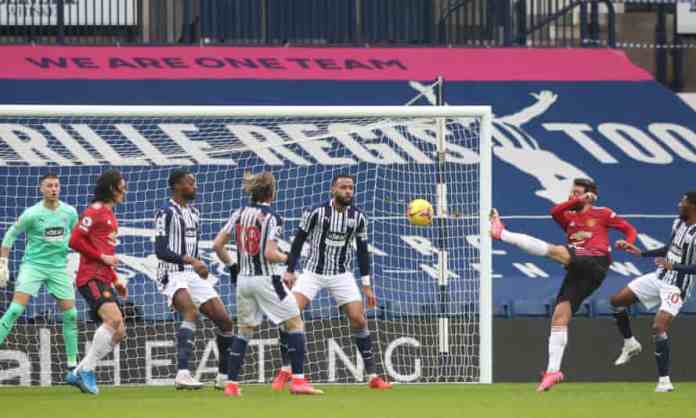 Since his joining, Bruno Fernandes is making the headlines for every good reason with Manchester United. His performance is becoming better and better every day.

Bruno Fernandes recently completed one year as a Manchester United player. The Portuguese have made an excellent impact in this one year. He has made the Red Devils the title contender again.

He has won 4 ‘Premier League Player of the Month’ award in this one year. In his 38 appearances for Manchester United in Premier in this one year, he has been involved in a remarkable 38 goals for the club. He has scored 22 goals and provided 16 assists.

Today Manchester United drew again in the Premier League against West Bromwich Albion. Ole Gunnar Solskjaer’s man found them behind within the 81 seconds of the game as Mbaye Diagne gave West Brom an early lead. But Bruno Fernandes came to the rescue again for the Manchester United. The Portuguese midfielder scored a volley to equalise.

The stats prove how instrumental Bruno Fernandes is for Manchester United. The Red Devils certainly know Bruno’s quality very well as he has been an influential figure at Old Trafford. He is surely one of the best midfielders in the league.