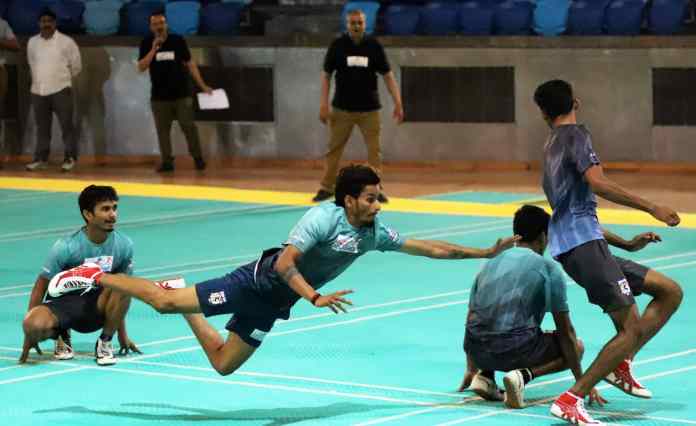 New Delhi, February 11: Country’s top Kho Kho players for close to four weeks have been busy sharpening their physical abilities and exploring various facets of the fitness required to excel in the sport with the help of sports science-based technologies in the Kho Kho Federation of India (KKFI) and Ultimate Kho Kho (UKK)-organised first-ever scientific High-Performance national camp.

After the rigorous training for the players under expert eyes, the ongoing 30-day camp is now all set to witness Kho Kho action as the KKFI’s 2021 Super League Kho Kho Tournament scheduled from February 12-15 at New Delhi’s Indira Gandhi Indoor Stadium.

The 138 players have been divided into ten teams (eight for men and two for women) as the tournament will showcase matches with the new playing rules of the upcoming Ultimate Kho Kho which aims to re-brand the game of Kho Kho as never before with its fast and pacey new avatar.

“During the on-going scientific camp, we have focused on improving overall fitness and physical abilities of players with required guidance given to corrected techniques and acquiring technology-based skillset. And through this Super League, we aim to evaluate the standard and level of each player in the actual match situations.

The experts will then scientifically analyse all the data and create an evaluation and performance grade for each player and we will continue to monitor and course correct the players in the coming days till we have a pool of perfect world-class players created over a period of six-seven months,” KKFI President Sudhanshu Mittal said.

The ongoing-camp which has seen players being monitored and analysed based on the findings and parameters ranging from sports physiotherapy, biomechanics, biokinetics, sports performance analysis, posture corrections and balance analysis of players in order to make them less injury-prone was brought into action.

“The players have made impressive progress with all the analysis and guidance. They have also trained to get used to the new format of Kho Kho that we are intended to introduce in the league. During the next few days, as the players play matches, we will be capturing them through multi cameras to see how the game is coming to life as a TV product,” Ultimate Kho Kho CEO Tenzing Niyogi said.

The KKFI’s 2021 Super League Kho Kho will have prize money for the winning teams. The men’s teams, which will see 120 players into the action, are named Jaguars, Ninjas, Rhinos, Cheetahs, Frisky Rangers, Panthers, Pahadi Billas and Sharks, and are divided into two pools.

The teams will face off against each other in their respective pool before the top two teams of each group progressing into the semi-finals which are scheduled for February 15 with the final also set to take place on the same day. However, 18 women players have been divided into two teams and they will be playing one match a day and the team with maximum wins will be declared the winner.