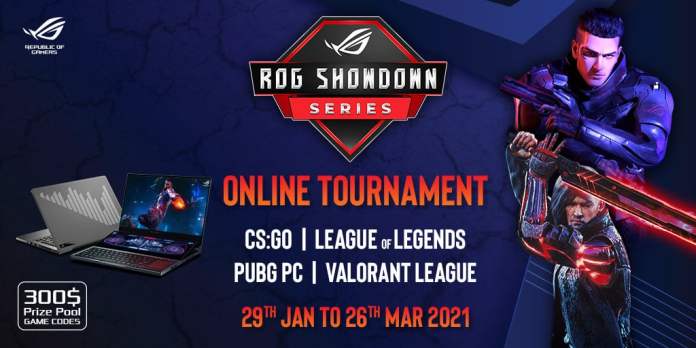 Asus has a good track record of bringing powerful gaming products with its insanely popular gaming brand Asus ROG. They also host a lot of gaming competitions for gamers and this time too they have announced the second edition of ROG Showdown.

ASUS ROG, today announced the second leg of ROG Showdown – a series of online tournaments organized by ROG which primarily focuses on the gaming enthusiasts. This is because of the pandemic and Asus encourages gamers to #StayAtHome as gaming is the only thing that have kept gamers alive this entire pandemic saga.

The second edition of ROG Showdown will be commencing from 29th January 2021 onwards. The participants will get a chance to choose from a series of tournaments amongst the most popular games including Counter-Strike: Global Offensive (CS: GO), PUBG PC, Valorant, League of Legends (LOL), Valorant League. The winning teams will also get a chance to win a cash prize of INR 50,000/ in the Valorant League during Q1 of 2021.

Speaking about the announcement, Arnold Su, Business Head, Consumer and Gaming PC, System Business Group, ASUS India, said “The year 2020 has been exceptional and has presented us with unprecedented challenges. While it has been a difficult year for all of us, we at Asus India, have turned this around as an opportunity for our young gaming community to have more exciting and meaningful experiences through a series of gaming tournaments during the first edition of ROG Showdown. We are grateful for the extensive participation as well as overwhelming popularity the campaign has garnered which led us to bring to you the second edition of the tournament, we aim to encourage more and more players to develop their skills at par with the global gaming ecosystem, enhance gaming tactics, learn from fellow players and create a collaborative gaming environment.”

“We are committed to innovating and creating new opportunities for the larger gaming community in India and ROG Showdown is a testament to our continued investment in fostering the gaming enthusiasts across the market. The success of the 1st edition of ROG Showdown has encouraged ASUS to initiate a tournament in APAC which is yet to be launched but shall provide Indian teams with a platform to participate with other global teams. With all these initiatives we are confident that this year will be no different and ROG will carve a place of its own among the competitive E-sports gaming ecosystem”, added Mr. Arnold Su.

In India, eSports has become very popular and it is the Indian gamers who are making name in the world. The First Edition of the ROG Showdown saw close to 7000 participants take part in the tournament, thanks to the strong participation from India, Bangladesh, Nepal, and Sri Lanka.

Undoubtedly, the first edition of ROG Showdown, that concluded in December 2020 with the multiple winners in respective tournament and league, was a huge hit and gamers won up to INR560,000/ prize pool.

ROG Showdown has received international recognition and the tournament has garnered approximately 1M audience base digitally. The registration will start from 23 Jan’21 for the first tournament of the second edition of ROG Showdown. Interested participants and teams can register themself from the ROG Showdown website: https://asus.in/ROG-Showdown-Series/