Everton vs Manchester United: Lineup and how to watch the Carabao Cup match live in India? 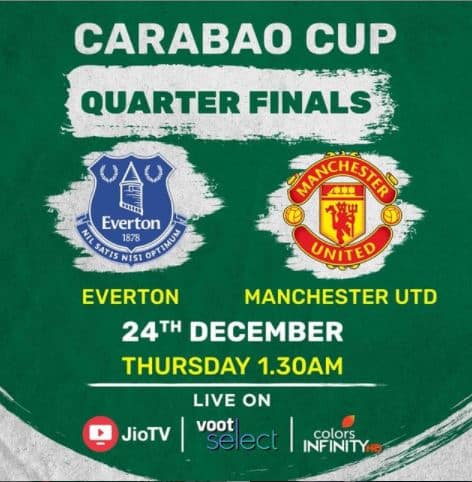 Manchester United are in full throttle at the moment as Ole Gunnar Solskjaer’s strategy have led the red devils to 10 away wins and a recent 6-2- triumph at Old Trafford against Leeds United. The red devils are now up against the toffees of Everton as Carlo Ancelotti will try to put a brake on the recent form of Manchester United. With victories over Arsenal and Leicester, Everton will have that bit of confidence but will it be enough to overturn Manchester United?

When is the Everton vs Manchester United Carabao Cup match?

The Carabao Cup match between Everton and Manchester United will be played on 23rd December 2020.

The match will be played at Everton’s home ground, Goodison Park.

The Carabao Cup match will be broadcasted live in India on Colors Infinity HD channel.

You can catch the live streaming of the Everton vs Manchester United Carabao Cup match in India on Jio TV and Voot (You need to have Voot Select subscription to watch the match).

Players to look out for: