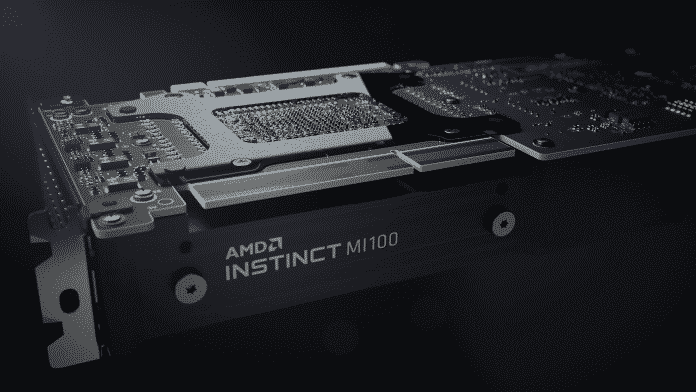 AMD has finally announced the next-generation CDNA GPU-based Instinct MI100 accelerator. The company calls it the fastest HPC GPU in the world. It will be utilizing the CDNA architecture, which is different than the RDNA. The new architecture is specifically designed for the HPC segment.

The card will feature a 7nm CDNA GPU and packs 120 Compute Units or 7680 stream processors. The CDNA GPU powering instinct MI100 measures at around 720mm2. The GPU has a clock speed configured around 1500 MHz and delivers a peak performance throughput of 11.5 TFLOPs in FP64, 23.1 TFLOPs in FP32, and will feature a total power draw of 300 Watts. The card will come with 4 and 8 GPU configurations and a rated bandwidth of 276 GB/s.

This new GPU from AMD does promise up to 2.1x more performance per dollar compared to the popular NVIDIA A100.

The known features so far include

“Today AMD takes a major step forward in the journey toward exascale computing as we unveil the AMD Instinct MI100 – the world’s fastest HPC GPU,” said Brad McCredie, corporate vice president, Data Center GPU and Accelerated Processing, AMD. “Squarely targeted toward the workloads that matter in scientific computing, our latest accelerator, when combined with the AMD ROCm open software platform, is designed to provide scientists and researchers a superior foundation for their work in HPC.”