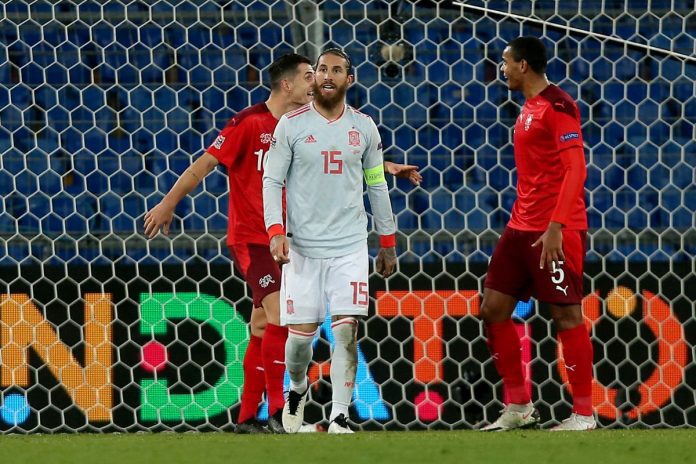 Spain, in their UEFA Nations League match last night against Switzerland, had a chance to put at least 3-4 goals past the hosts. However, Yann Sommer was a wall between the sticks as he denied Sergio Ramos not one, but two penalties on the night.

This sees the Swiss keeper break Ramos’ record of converting 25 consecutive penalties for both club and country.

The first penalty was won following a handball decision that went in the favour of the visitors following the ball striking the arm of Ricardo Rodriguez.

Sergio Ramos, the designated penalty taker, was entrusted with the responsibility of converting from 12 yards out, but a weak effort to the left-hand side of the net was well-read by Sommer as he dived to push the ball out for a corner to break Ramos’ streak.

The second penalty was given to the Spaniards after Nico Elvedi brought down Alvaro Morata in the box, which saw the Borussia Mönchengladbach defender sent off with 10 minutes left on the clock.

Ramos took another cheeky run-up, followed by a Panenka attempt that, as aptly described by the Daily Mail, “will leave Fulham star Ademola Lookman affording himself a sigh of relief.”

Ramos has been a long practitioner of the Panenka technique for penalties, and has been very successful using it. But it was just not his day, on his 177th appearance for Spain.

The match against Switzerland sees Sergio Ramos become the most capped player in Europe, overtaking Gigi Buffon’s record of 176. The 34-year-old still has a lot left in the tank and should not be judged following his penalty misses last night.

Spain manager Luis Enrique’s comments on the issue also go a long way in reaffirming confidence in his team’s captain, saying that if there were one, Ramos would have taken the third penalty as well.