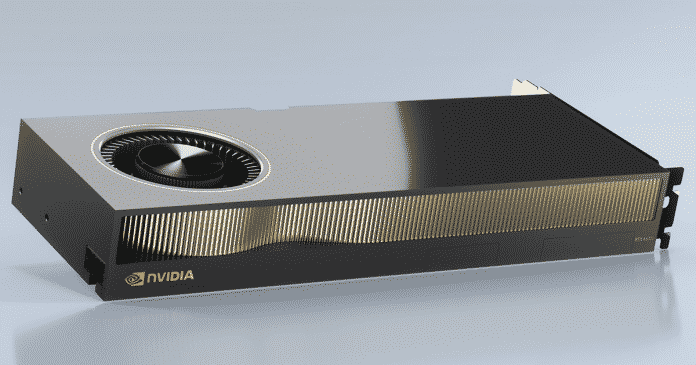 Nvidia is the leader in the Graphics Card manufacturing market. The latest venture of striking a once in a lifetime deal with ARM has given a new boost to the tech giant. Today, however, let’s talk about another experience of the manufacturer of the graphics.

The company’s upcoming Nvidia RTX A6000 is based on Ampere GPU-based graphics card and is aimed at flagship workstation systems. The details of the forthcoming card have not been made public, but we have on our hands yet another leak, which gives out the benchmark scores of the RTX A6000. AdoredTV leaked the alleged benchmark scores, and according to sources, the RTX A6000 will be the company’s fastest workstation graphics card yet.

According to sources, the RTX A6000 will feature 48 GB of GDDR6 memory. The A6000 also offers 768 GB/s speeds. The system is powered through the new EPS 12V 8-pin connector. Featured on the back of the card can deliver up to 300W of power to the GPU.

It has the latest NVLINK, which offers 112.5 GB/s (bi-directional) speeds. While the cards native PCIe Gen 4 interface provides a 16 GB/s of link speed. Four DisplayPort 1.4 ports are provided on the RTX A6000.

The latest graphics card offering just an 11% lead over its predecessor is disappointing. However, with these being only leaks, we will see a performance increase when the GPU gets released in the market.