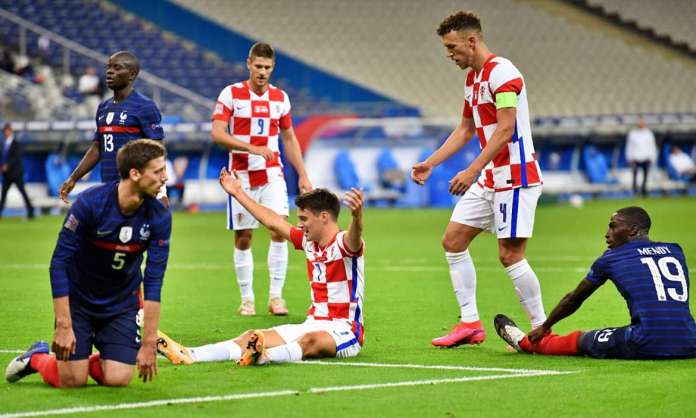 The last matchday of the international break saw a number of entertaining fixtures being played. Headlined by the likes of France vs Croatia and Italy vs Netherlands, let’s have a look at all the results from the 14th of October.

A rematch of the 2018 World Cup final was played out as Croatia hosted France in the Nations League on Wednesday evening. However, the outcome was the same as Les Blues came out on top with Griezmann and Mbappe getting onto the scoresheet to win it for the reigning Champions of the World.

Didier Deschamps applauded Griezmann and Pogba for their performances on the pitch and made a great case for how good Griezmann can be when deployed in his natural position.

Having made his England debut barely a week ago against Wales, Reece James was shown a straight red for dissent after the final whistle blew. Harry Maguire was sent off during the game for a rash tackle after already being on a yellow.

Eriksen was the only name on the scoresheet as he scored from the penalty spot, which had a fair bit of controversy to itself.

Drama just seems to follow England around, doesn’t it?

Manchester United new boy Donny Van de Beek scored in orange for the first time as the visitors called it even with Italy at a goal apiece.

Lorenzo Pellegrini opened the scoring in the 16th minute, only to have it equalised after ten minutes through an assist by Memphis Depay.

In the post-match conference, Italy coach Mancini confessed that the Netherlands’ use of the 3-5-2 gave the Azzuri a tough time.