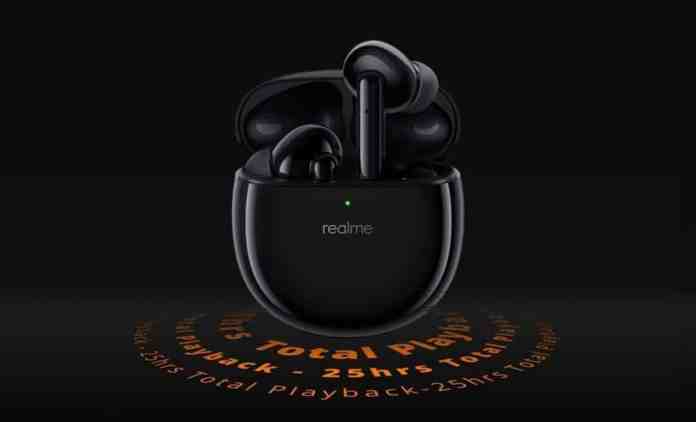 Realme is going to launch the Buds Air Pro on October 7 along with several other devices. The event will cover one neckband, a smartphone and this earbud. There might be several other devices listed for the launch but until now the above devices have been teased by the company.

The Realme Air Buds Pro will be sold via Flipkart and realme.com. The Flipkart listing of the device has already been revealed. Let’s have a look in what we are getting on an upgraded version. The Realme Buds Air Pro is coming with a totally new design where it looks more like the Apple AirPods Pro which has rubber ear tips. These earbuds will also have a similar design to AirPods Pro.

Now coming to the specifications of the Realme Air Buds Pro we can see that it will have a total playback time of 25 hours. The earbuds will have the ANC feature and thus keeping it on we can get a playback time of around 20 hours. According to Realme 10 minutes of charge will provide a playback time of 3 hours and it takes only 1 hour to fully charge the whole thing.

It will come with a 10 mm dynamic driver which will provide a rich audio quality paired with powerful bass. Buds Air Pro will come with IPX4 protection that will cover rain or sweat. Like the Realme Buds Air, this pro version will also have a low latency mode but this time the threshold went up to 94ms and the company calls it Super Low Latency mode. Needless to mention this one will also support touch control functions and controls making it easier to control without laying any hand on your smartphone.