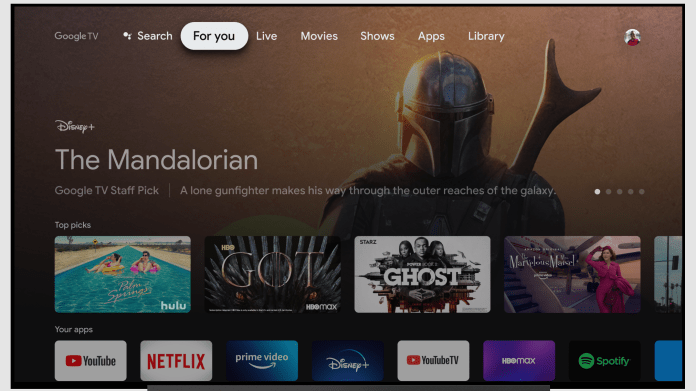 Google announced its two new pixel phones and the new ‘Chromecast with Google TV’. the new devices were much anticipated and we have seen many leaks regarding the same. However, now the curtain has finally been raised on the new devices.

Let’s talk about the new ‘Chromecast with Google TV’.

The design is very similar to the previous Chromecast but the new member is a bit more elongated. Its HDMI cable can be plugged directly to TV or AV receivers and is powered by a USB adapter using the new USB-C connector.

Google’s new Chromecast is now capable of outputting 4K at 60Hz. It supports Dolby Vision, HDR10+, and also HDR10. The audio has been upgraded to support Dolby Digital and Dolby Digital Plus with Dolby Atmos.

It comes with a dual-band 802.11ac Wi-Fi and but the Bluetooth version remains unspecified.

But, did you know that the device is actually powered by Android TV?

You heard it, Googles new ‘Chromecast with Google TV’ is a Chromecast only in name. Apps like Netflix, Disney Plus, Amazon Prime Video, and many others can directly be downloaded onto the Chromecast itself. The apps can be browsed using the new remote, and the contents can be played without having to cast it from another device. It’s all very intuitive and easy to use, while closely resembling the functionality of a Roku or Amazon TV.

Android certainly is not something new in the market. Almost all the smart TVs in the market and set-boxes from Nvidia’s names already provide a traditional Android TV in their devices. Google sporting the same OS, and offering the same functionality would be a disaster for the new Chromecast.

But Google is not just some ordinary tech company.

While Android TV is certainly the foundation of the new Chromecast, Google has created a new “Google TV” layer atop its operating system. This provides a whole new experience and completely replaces the old home screen feel.

Google TV brings content from all streaming services that are subscribed and lists them all side by side in rows of recommendations.

Oh, and the device can also be used to cast movies, shows, and audio from others to Chromecast.

So the new Chromecast is a Chromecast but runs on Android TV. It can cast contents like a Chromecast but can also be used as a smart TV device offering streaming services like Netflix and Disney+. Google has surely confused us this time.

The device offering all-new “Google TV” is placed at $50 and can be pre-ordered in Australia, Canada, France, Germany, Ireland, Italy, Italy, Spain, and the U.K.

The device will be available for purchase on October 15.