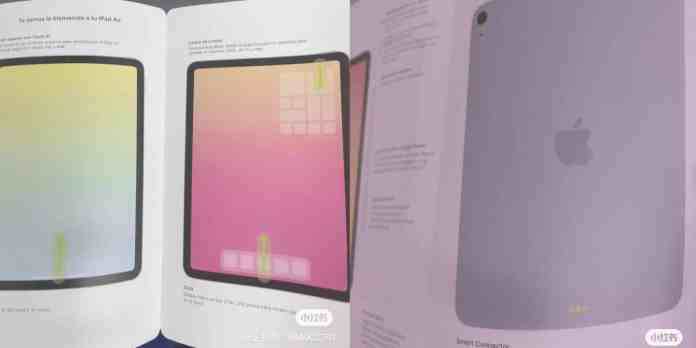 From the very beginning of this year, so many rumors are spreading in the market regarding Apple’s work on a new iPad air model. Not only that, but the screen size was also leaked i.e. 10.8-inch. Apple’s work with this new iPad Air model featuring a full-screen display was leaked by @I0vetodream, later Ming-Chi Kou leaked the screen size.

A few days back from today, Duan Rui shared some images of the user manual of the new iPad Air, pretending to be the iPad Air 4. All the images clearly show the entire design along with a thin-bezel full-screen face. There is mentioned the Type-C port in one of the pages, which means the upcoming iPad Air has a Type-C port rather than the Lightning.

The manual also confirmed that for authentication, the device will have the Touch ID feature, but that will be placed in the power button on the side, not in the home button.

Now, today (31st August) Soybeys posts two more clear shots of the iPad Air 4 user manual. Though the unit printed on the pages is clear enough, the writings around are blurred mostly.

Apple didn’t officially announce anything regarding the iPad Air 4 but this much of leaks that coming out day by day hiked everyone’s excitement and also strengthen all our expectations.

SocioRAC, a technology startup which is working in the areas of Data Management & privacy has launched HyLyt app for remote working...
Read more
Recent News

Recently, Apple has launched the 8th generation of its revolutionary iPad series with an A12 Bionic chip making it the most powerful...
Read more