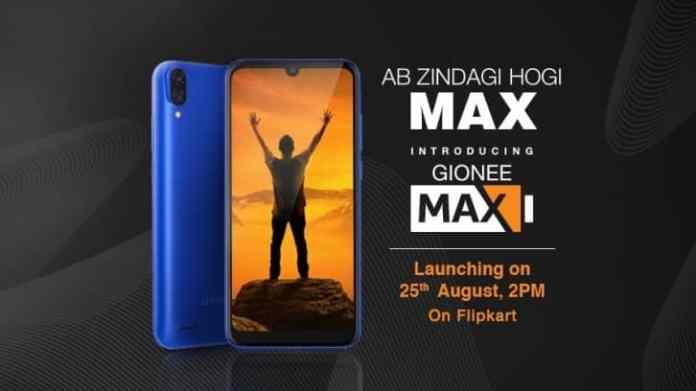 A few days ago Gionee India revealed that they are going to launch a new budget centric smartphone dubbed as Gionee Max within a price range of Rs.6,000 ($80). This phone targets the budget segment users in India with “Max” specs demanded by the millennials.

The phone will launch on August 24 at 2 PM on Flipkart. It is not sure if the company will hold a launch event or will it be a silent launch like some other smartphone launches. The probability is that Gionee will launch the smartphone silently and the price will be set below Rs.6,000 as promised by the company. It will have a blue colour variant.

Yesterday Gionee India has revealed some of the key specs of the smartphone and as we know the price we can pretty much understand the justifications on the specifications. The specifications have been jotted down in the official twitter account of the company as well as displayed in the landing page of Flipkart.

After a long interval, Gionee is relaunching its smartphones. Previously, the Gionee S series smartphones were prevalent. Now, the good news is...
Read more

Gionee's next offering in its home country china is official and is being dubbed as Gionee M12 Pro which comes with...
Read more

Gionee introduced with a new smartphone in China - Gionee M30 with a massive battery capacity of 10,000 mAh which is...
Read more
Load more

Brighton and Hove Albion 0-3 Manchester United The Seagulls hosted the Red Devils for the second time in a...
Read more
Football

Liverpool vs Arsenal: Lineup and how to watch the Carabao Cup match live in India?

Liverpool’s recent triumph against Arsenal is a clear indication of how they plan to go about their new season. 61 games undefeated...
Read more
Google