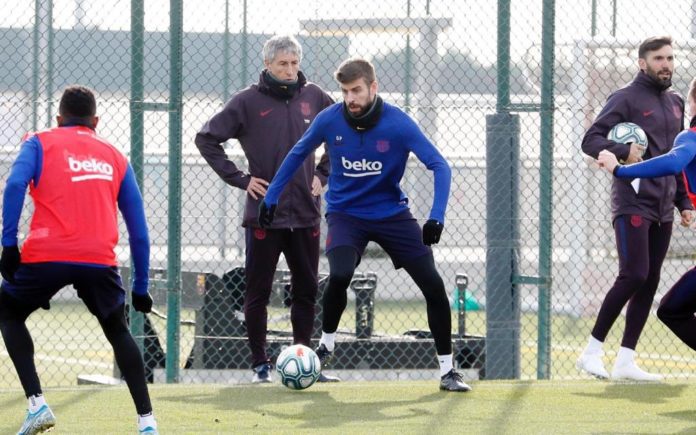 Barcelona’s new coach Quique Setien is known to be an idealistic coach who believes in hard work rather than luck. His way of playing and ideology has brought back the excitement of the Barca fans across the globe.

In the meantime, before today’s match against Levante, Quique was asked about Gerard Pique’s business and various investments. So, the 61-year old cleared his throat and he has spoken clearly that he doesn’t have any problems regarding them until it distracts the defender from his on-field duties.

The main centre-back of Barcelona, Pique, has grown his empire over a couple of years indulging in various businesses and investments. His company Kosmos helped transform the Davis Cup in Madrid, which he described as “the project of my life”.

When the 32-year old’s commitment has been called into question because of his wide business dealings taking him around the world even though his Barca training schedules.

“I am not the father of any of them. I am only their coach. I will worry about one of them when they do not train well,” he said in an interview with Sport. “What am I going to tell him about what he can and cannot do?

“Pique is mature and responsible for what he can do and what he can’t. I see him train well, willingly. What he does in his private life… I’m not on top of these things.”

Even though being his squad’s star player, Quique has warned that he will not be hesitated to drop any of his star players if they fail to impress in the rigorous training sessions that he is hosting during the course of the week.

“If I see that their performance drops, another will play because the one they are going to blame is me,” the former Real Betis and Las Palmas coach added. “I will play the one that best solves the games for me.”

The Blaugranas will be facing Levante at the Camp Nou today at 9 pm local time and we expect the Spaniard to be in the starting XI as this game will be crucial for Barcelona to win after Real Madrid’s yesterday’s win over Atletico Madrid.